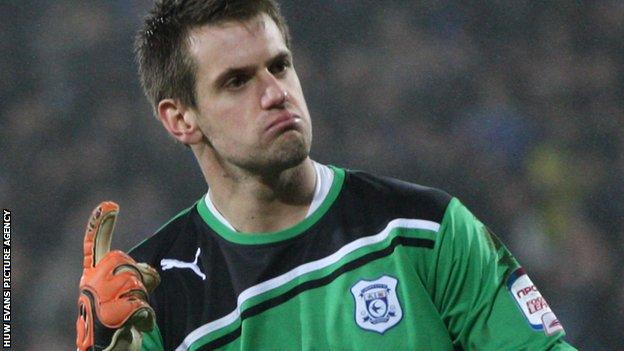 The three players arrived at the club during the reign of former Bluebirds boss Dave Jones.

Jones' present club Sheffield Wednesday are believed to be among the clubs interested in signing Heaton.

Cardiff were beaten by West Ham United in the Championship play-off semi-final.

Heaton joined Cardiff on a free transfer from Manchester United in 2010 having spent a loan spell with the Bluebirds during the 2008-2009 season.

The 26-year-old has played second fiddle to David Marshall this season although he featured prominently in Cardiff's Carling Cup run.

He was Cardiff's hero in their semi-final penalty shoot-out win over Crystal Palace and played in the final defeat against Liverpool.

Former Wolves and Celtic defender Naylor joined Cardiff in August 2010 but his opportunities under Malky Mackay have been limited with Andrew Taylor preferred as left back.

Defender Quinn joined Cardiff from Motherwell for £300,000 in July 2009 and made over 50 appearances in his three years with the Bluebirds.

But the Scotsman played only five games for Cardiff during this season and his only Championship appearance came as a substitute against Southampton last September.

Meanwhile Cardiff have confirmed they will be travelling to Switzerland for a pre-season training camp.