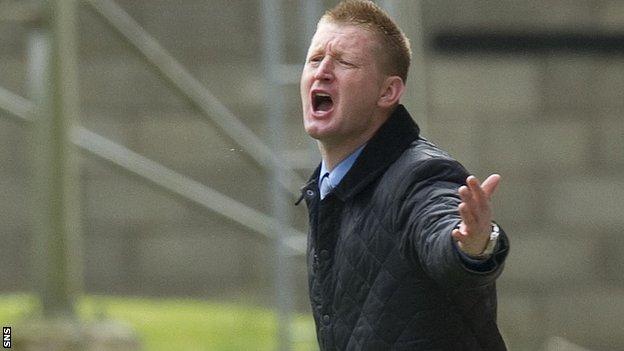 St Johnstone boss Steve Lomas has a big rebuilding job on his hands as he looks to repeat the success of a top six finish in the Scottish Premier League.

"It's now a big six-to-eight weeks for myself and the chairman," said Lomas after ending the season with a 4-0 home defeat to Rangers.

"We've got 10 players on contracts for next season, so we're looking at getting at least 10-to-13 players in.

"I hope the chairman hasn't booked too many holidays."

The Perth side failed to pick up a single point after the league split for the final five fixtures but Lomas was concentrating on the positives from his first spell in Scottish football.

"It has maybe been a reality check in terms of where we are," he explained on BBC Radio Scotland.

"We have made the top six and maybe expectations went up out of sight.

"The split has been disappointing, there's no getting away from that.

"But, overall, if the fans had been offered top six, they'd have probably taken it.

"We'd certainly have bitten your hand off. I'd rather lose every game after the split than be involved in games down below."

The loss to Rangers ended Saints' hopes of securing a Europa League spot themselves, but they could still qualify for Europe if Hearts win the Scottish Cup.

"European football could be a hindrance," said Lomas. "If we get there, and the game is on the 16 July, we might not have a team.

"The staff and players have done our bit, it's now over to the board to try and support us and I'm sure they will."

Reflecting on the loss to Rangers, the former West Ham captain said: "I thought we dominated the first 25 minutes and Cillian Sheridan had a great chance to put us 1-0 up.

"But then Lee McCulloch scores a great goal and it seemed to affect us really badly, whether it was down to a run of four defeats, a long season and maybe some players coming out of contract, I don't know.

"I've really enjoyed my first season. My focus is on getting players in that can keep us in the SPL. That's the priority whether you like it or not.

"If we can make top six again, then great."