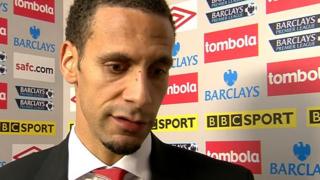 We must reclaim title - Ferdinand

Rio Ferdinand says Manchester United must shrug off the disappointment of losing the Premier League title to local rivals Manchester City and become champions themselves next season.

United won 1-0 at Sunderland on the final day of the season, but with City 2-1 down at home to QPR in injury time, goals from Edin Dzeko and Sergio Aguero gave Roberto Mancini's side a 3-2 win and the Premier League trophy.