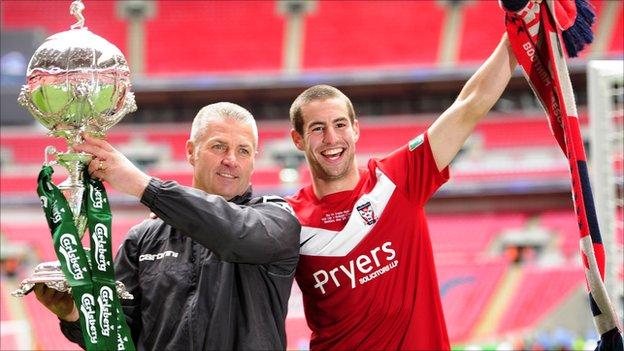 York City boss Gary Mills wants his side to complete their season with promotion after lifting the FA Trophy.

The Minstermen beat Newport 2-0 on Saturday and return to Wembley to face Luton next Sunday in the Blue Square Bet Premier play-off final.

"We said we wanted to do the double and we're halfway there now," Mills said.

"I just hope this is the start of many good things to come here. We've worked very hard to achieve what we want to achieve here."

He added: "I want to move this club on. My job is to get this club promoted and that's all I'm thinking about now."

Blair, who scored the winning goal in the FA Trophy semi-final against the Hatters and grabbed the extra-time winner against Mansfield in the Blue Square Bet Premier play-off semi victory, put York on the way to victory against the Exiles before Lanre Oyebanjo secured the Trophy with a second.

"Matty never gives in. If he loses the ball or misses a chance it doesn't bother him, he just keeps going," he continued.

Like any football club now you need to move on and progress and it's not just about getting people in through the turnstiles any more.

"He's a fantastic lad to have in the squad because he's always smiling and he deserves all the plaudits he's had this season."

Mills acknowledged that Saturday's win was just the start of a pivotal period for the club.

"It's a massive week for us, the decision on Thursday will be huge for where this club goes.

"Like any football club now you need to move on and progress and it's not just about getting people in through the turnstiles any more.

"We're going to celebrate this win and have a couple of days off but we'll be back in on Tuesday and focussing on beating Luton," he concluded.

Along with Forest Green, York are the longest serving members of the top division in non-league football, having been there for eight years.