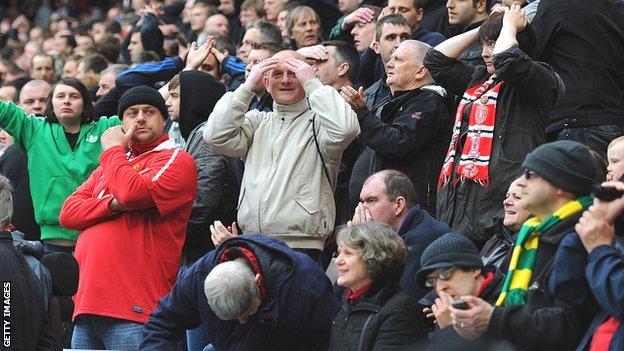 On a day when the crowd reactions in the Stadium of Light told most of the unfolding drama that fluctuated between the cities of Manchester and Sunderland, one person was ahead of the game.

As news filtered through that Manchester City had sealed their first title for 44 years thanks to Sergio Aguero's stoppage-time winner at the Etihad Stadium, one United fan at Sunderland unfolded a makeshift banner that read: "19-3 Big Deal"

The numbers referenced the number of top-flight championships each team has now won.

And while the difference between the clubs' recent success is easily underlined by that statistic, United have yet to seal a title in the manner which Roberto Mancini's side beat QPR 3-2, therefore making United's 1-0 win over Sunderland irrelevant.

How a dramatic final day unfolded in the title race

20 mins: Wayne Rooney sends Man Utd two points clear at the top by giving his side a 1-0 lead at Sunderland.

39 mins: Silence turns to bedlam at Etihad Stadium as Pablo Zabaleta puts Man City ahead against QPR and back on top on goal difference.

48 mins: Advantage United. Djibril Cisse stuns City with an equaliser and it is all change at the top again. Sir Alex Ferguson's side are two points clear with 42 minutes of normal time to go in the season.

66 mins: City are capitulating. After Joey Barton is sent off for QPR, Jamie Mackie puts the Londoners ahead against all the odds. United, now three points clear with 24 minutes of normal time remaining, dare to dream.

90 + 5 mins: Man Utd win at Sunderland but City are still playing. And City despair turns to delirium as Sergio Aguero scores a last-gasp winner. It is utter heartbreak for Man Utd's fans at the Stadium of Light, though, as news filters through of the late drama. Game over - City win the title.

Once City came back from 2-1 down against 10-man QPR to turn the championship round in injury time, they re-wrote an unexpected chapter in their history, having played the bridesmaid for so long to their city rivals.

The fact their first Premier League title was won on goal difference must have made it harder to take for United boss Sir Alex Ferguson.

"It is just about the most harrowing thought you can have, when you start thinking about goals you could have scored during the course of the year and it comes down to those last couple of minutes," reflected Sunderland boss Martin O'Neill, whose Celtic team lost the Scottish Premier League title to Rangers by a single goal in 2003.

"United did their bit, but then to hear the news [of City's two late goals] come through, it was really unbelievable."

United fans will cast their minds back to the defeats by City and at Wigan, but throwing away a two-goal lead in the closing minutes against Everton will be a bitter pill to swallow.

Still, for much of the second half against Sunderland, where Wayne Rooney's header had given them a first-half lead, there was the sense that the 2011 champions might hang on to the trophy. It would have been in keeping with City's recent past.

Before the game, even Ferguson admitted the "noisy neighbours" were favourites to re-write their fortunes, and once Pablo Zabaleta had given them a lead, there was an early feeling inside the Stadium of Light that it might be a fruitless afternoon for the Scot's decorated team.

The Sunderland fans celebrated that goal like it was one of their own and took relish in taunting their United counterparts.

But the 2,600 travelling supporters erupted as word got around that Djibril Cisse had equalised for QPR, and, despite Joey Barton's sending off, they started to taste silverware once Jamie Mackie gave Mark Hughes's side an unlikely lead.

Sunderland and Manchester United's players remained focused on the job in hand, with Simon Mignolet pulling off a superb save to stop Ryan Giggs's follow-up after Paul Scholes fired against the post.

A second goal was looming and, if City could somehow throw away a lead against a 10-man QPR side, who had won just three games away from home this season, maybe they were never going to shake off their tag as serial losers.

By this stage, United were champions, and as time ticked into the final quarter, they did not look like conceding, and even when the Stadium of Light went into overdrive again once Edin Dzeko had equalised for City in stoppage time, it still looked like they would hang on.

The full-time whistle was met with muted applause. United's job was complete but all eyes and ears were elsewhere, hoping, wishing for news of the final whistle at the Etihad.

The United players, led by Rooney and Ryan Giggs, went towards their fans to thank them, but they were not celebrating. Not yet.

And then seconds later, the cheers came. But they were not loud enough for the United support. It wasn't the final whistle at the Etihad. They were louder in volume and they were coming from the Sunderland fans. The United faithful did not need to look at their phones, they did not need to crush their ears to their portable radios.

It was clear. Having had the title in their grasp for 13 seconds following the end of the game, from the silence, somehow City had triumphed. It was an astonishing conclusion to an unbelievable season.

But not for the man in the know. At least his artistry wasn't wasted.

As the Sunderland support mocked United by performing the Poznan, a celebration which City fans have made famous in the Premier League, it was the only comfort on show.