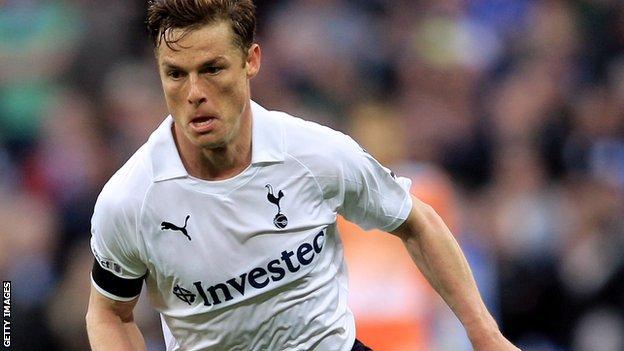 Tottenham manager Harry Redknapp says midfielder Scott Parker's Achilles injury could rule him out of the England squad for this summer's European Championship.

Parker missed the 2-0 win over Fulham - a victory which secured Spurs a fourth-placed finish in the Premier League.

If he had to have an operation it would be long term, so we will have to wait and see how (Parker) is

Redknapp said: "If it doesn't clear up he wouldn't be fit.

"He is going to have an injection on it on Monday and they hope with six or seven days rest it will be OK."

Redknapp added: "If he had to have an operation it would be long term, so we will have to wait and see how he is."

Parker, 31, was named England captain for the friendly against Netherlands in February.

Redknapp was able to play down fears that Kyle Walker could also be struggling for the European Championship.

The right-back was already playing with a broken toe and suffered an ankle injury in Sunday's victory but Redknapp added: "Kyle will be OK for the Euros."

New England manager Roy Hodgson is due to announce his 23-man squad for Euro 2012 in Poland and Ukraine on Wednesday, 16 May.

Hodgson is already without Manchester United defender Chris Smalling due to a groin problem.

Arsenal midfielder Jack Wilshere is missing with a long-term ankle injury and Spurs defender Michael Dawson is also absent with an ankle problem.

Sir Alex Ferguson has raised doubts over Rio Ferdinand's ability to cope with tournament football, while Hodgson must assess whether the defender can play alongside John Terry.

Goalkeeper Ben Foster, who has spent the season working under Hodgson at West Brom, has reiterated that he does not want to be considered for international selection.