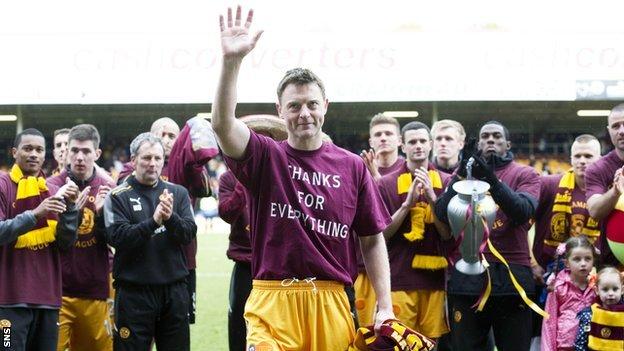 Stephen Craigan was pleased to make one last appearance in front of the Motherwell fans before retirement.

The departing club captain played 79 minutes of the 2-0 home defeat by Dundee United.

"The result didn't go the way we wanted it to but we forget the result on a day like this," said Craigan.

"It was just about me trying to get some game time to say thanks to the fans for the years I've been here. It's been an emotional day."

He's been a terrific professional

Craigan, who won 54 caps for Northern Ireland, made his first Motherwell appearance in season 1997/98 and spent two more years at Fir Park before joining Partick Thistle.

He returned to the Steelmen in 2003 and became an integral part of the defence for the next nine years.

"I just feel I want to go out on a high when I'm feeling good and fresh," said Craigan, who had been nursing injury in recent weeks.

"I didn't want to overstay my welcome. Time will tell whether it's the right decision or not."

Manager Stuart McCall, who had "no complaints" about losing the final match of the season, paid tribute to 35-year-old Craigan.

"He's been an outstanding pro since I've been at the club, led by example on the training ground and in the dressing room he's been excellent.

"We wish him all the best because he deserves it, he's been a true servant to this club.

"I know he had a little spell at Partick Thistle but he's spent the majority of his career here and he's been a terrific professional."