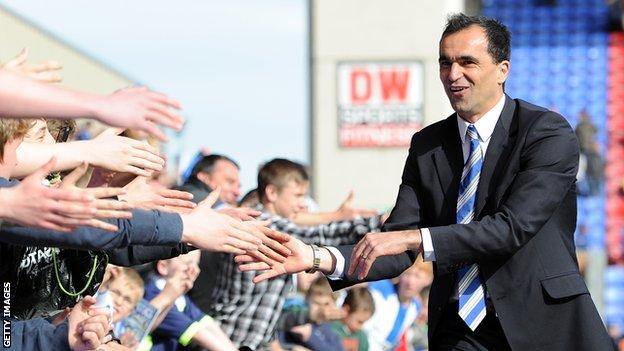 Wigan manager Roberto Martinez says he is planning for next season at the club despite speculation of a move away.

Martinez, who rejected Aston Villa last summer, has been linked with Liverpool after securing an eighth Premier League season for Wigan.

"There is another manager in that job, no," said the Spaniard.

"I'm not going to lie to you, I like the speculation. But we need to make sure we carry on with the progress we've been making."

Martinez, April's Premier League manager of the month, was speaking after watching his players bring the curtain down on the campaign with a 3-2 win over Wolves at the DW Stadium on Sunday.

Wigan spent most of the season fighting relegation yet finished with a flourish, seven wins in nine league games securing a 15th-placed finish, seven points above third from bottom Bolton.

"When you get stories linking clubs with your players or in this case with a manager, it must be because you have done something right," added Martinez, 38.

"The speculation I don't like is when it suggests you are going to lose your job after a couple of defeats.

"I am proud and happy that the club are attracting a lot of good headlines and stories.

"We always need to be prepared that whatever happens is for the good of the club.

"All I am bothered about is working hard and making sure the chairman is a proud man when he assesses his football club."