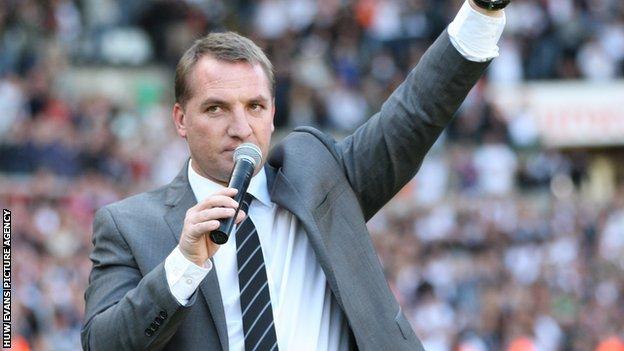 Manager Brendan Rodgers says Swansea's 1-0 victory over Liverpool was a fitting end to a "fairytale" first season in the Premier League.

And victory over Kenny Dalglish's side meant the Swans ended the season 11th in the Premier League.

"It has been a fairytale and what an end to the season," said Rodgers.

"The players did brilliantly, their pressing and work-rate was phenomenal.

"Everyone associates us with our passing, movement and creativity, but behind it there is a real hunger to get the ball back and the hunger was incredible.

"We were worthy winners and it finished a brilliant season. We have kept 14 clean sheets, which is outstanding at this level.

"And to finish having beaten Arsenal, Manchester City and Liverpool in our first season gives us a big boost going forward."

The victory marked the final Swansea appearances for loan stars Steven Caulker and Gyfli Sigurdsson as they return to Tottenham and Hoffenheim respectively.

But Rodgers is hopeful of bringing the pair back to south Wales next term, having reportedly had a bid to make Sigurdsson's move permanent rejected.

"The season has finished and it's about planning going forward," said the Northern Irishman. "In football terms the squad will break up as players will leave and players will come in.

"I will speak to Tottenham on Steven Caulker. He has been incredible for me this season at just 19 years of age.

"With Gylfi, we will have talks with Hoffenheim over the course of the next week or so.

"That's the challenge for me, recycling the squad, retaining that hunger and giving the players help."