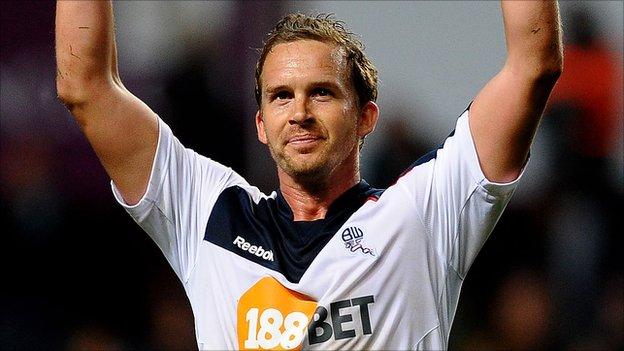 Captain Kevin Davies has said he is "pretty sure" he will be at Bolton next season, despite their relegation.

was not enough to prevent the drop after 11 years in the Premier League.

"Some players may have made their decisions already, whether they want to stay or not," the 35-year-old striker told BBC Radio Manchester.

"Right now I don't want to talk about it too much, but I'm pretty sure I'll be here next year."

Davies, who is out of contract in the summer, joined Wanderers from Southampton in 2003 and has scored 78 goals in 369 appearances for the club, but was a January target for Sunderland, who had a bid rejected.

QPR's last-gasp defeat at champions Manchester City meant a win for Owen Coyle's side would have been enough to keep them in the top flight.

They led 2-1 with 13 minutes to go, but a penalty from Jonathan Walters condemned Bolton to the second tier for the first time since 2001.

"It's a difficult day to take," said Davies. "It feels like a bad dream.

"We found ourselves coming into the game with a chance and we've let that chance go."

Defender Sam Ricketts said it was a day no-one connected with the club "wanted to face".

He added: "We gave ourselves a huge mountain to climb. It was that early part of the season where we let ourselves down a little bit.

"We got in a great position to get out of it and in the end we couldn't quite achieve it.

"I think it's a time to get away, refresh yourself and look at how to bounce back from this. You need to evaluate when things haven't gone according to plan.

"The most important thing is to come back stronger and better than you were before."