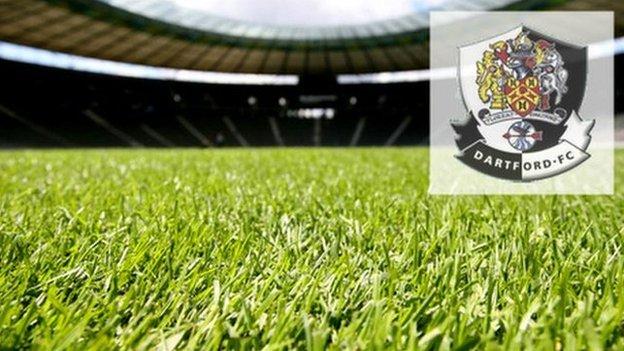 Dartford hero Lee Noble has revealed his winning goal in the Blue Square Bet South play-off final came after a piece of advice from his father.

"My dad said to me before the game to shoot on sight so I had my first touch of the game, I've hit it and it's gone top corner," he told BBC Radio Kent.

"I'd like to thank my dad for that one," he added.

After a 26-year absence, Dartford will join Ebbsfleet United in the Blue Square Bet Premier next season.

The Darts, who six years ago were without a stadium, finished six points clear of Welling in the league and had earlier dispatched Basingstoke Town in the play-off semi finals.

And Noble admitted he could barely contain his emotions at the final whistle.

"It was a great feeling today," he said. "It was something I dreamed of last night - scoring in this final and winning 1-0.

"It's so exciting. We've dreamt of it all season.

"We tried to catch Woking but it didn't quite work out for us. But we wanted to win the play-offs and we've done it.

"It's the best game, the biggest crowd I've ever played in front of. All in all, it's a great day for myself."