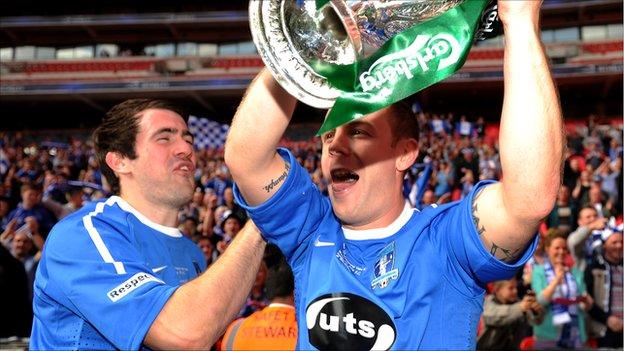 Dunston UTS striker Andrew Bulford has described his relief at completing his record of scoring in every match of the club's FA Vase-winning campaign.

and capped a run of 15 goals in nine Vase games.

"When I got to the semi-finals I thought I've got three games left to do it," Bulford told BBC Newcastle.

"I scored the two in the semis and when I scored today it was like a monkey off my back, now it's time to relax."

Bulford added: "It's unbelievable, I've dreamed about this since I became a senior player."

For West Auckland, a disallowed goal from Mattie Moffat and a number of missed chances were punished by Bulford's ruthless finishing.

"They deserved to win as they took their chances, they were clinical," West manager Peter Dixon told BBC Tees.

"I wasn't too despondent at half-time, the one ball over the top we didn't deal with and Bulford took the chance.

"I wasn't concerned but I knew how good they were defensively. But their second goal was the final nail in the coffin."

"It could be a season where we get lots of accolades for being nearly achievers," Dixon continued.

"We'll see what we're made of on Wednesday, whether we've got big enough characters in the dressing room to come back and have a go."

Meanwhile, Dunston midfielder Michael Dixon followed in the footsteps of father Paul in lifting the FA Vase - Dixon Sr doing so when Newcastle Blue Star side won the trophy in 1978 under the old 'twin towers'.

"It's a surreal experience," Dixon added. "Surreal from the moment I stepped into the centre circle, (and) I was thinking this is where England play."