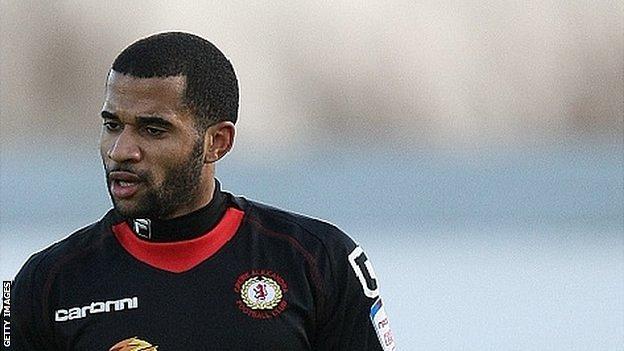 Carl Martin said he is focusing solely on Crewe's play-off semi-final second leg against Southend, despite being out of contract this summer.

The 25-year-old defender was a late call-up for Sunday's first leg at Gresty Road, which Alex won 1-0.

The Londoner, who lost his first-team spot after being injured earlier this season, said now was not the time to think about his future at the club.

He told BBC Radio Stoke: "All our focus has to be on Wednesday."

Martin said he had not been told he would be playing until he arrived at the ground, but had prepared as though he would.

"I knew it was a possibility with the injury situation, so I prepared properly and was delighted to be back playing," he said.

The former Wealdstone player was signed by former Crewe manager Dario Gradi on a two-and-a-half year contract in October 2009.

Martin continued: "I got dropped a few months ago when I got injured.

"The boys who have been playing have been excellent, so you can't be bitter about being left out, you just have to get on with it.

"I owe the manager a lot for bringing me back in, I really do. It's great he had faith in me after not playing for so long.

"It's up to [Crewe manager] Steve [Davis] whether I stay, and what happens regarding my contract is obviously important, but we have to focus on Southend, on getting our game plan right, and we'll take it from there.

"I think their game plan will be to bombard us from the start, but that's what they did [in the first leg] and we withstood it.

"Taking a lead there is massive - the main aim was to go there still in the tie, and we certainly are that."