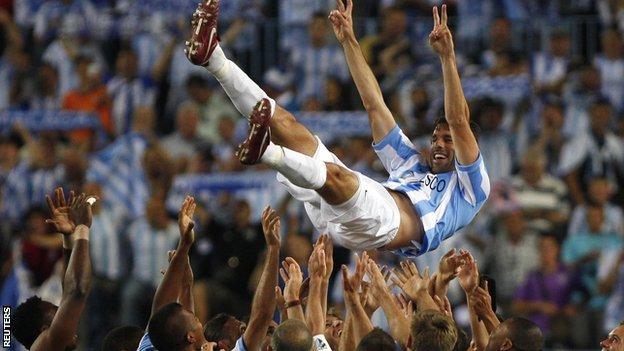 The Dutchman had been playing with Spanish side Malaga but endured a difficult season, scoring only five times in 35 games.

His contract had been coming to an end and he made his last appearance in the Andalucian outfit's 1-0 win over Gijon.

"I've played my last match in my professional career," he said upon quitting the sport.

"I wanted to play in the Champions League, but it is the moment to leave.

"I have arrived at my physical limit and I can't play at the maximum level. I couldn't have had a better send-off than this.

"I feel happy that I am the one taking this decision. I would like to thank Malaga, the technical and medical staff for an unforgettable year.

"I am proud to have won collective and individual titles, but my greatest satisfaction was to be able to work day after day, year after year."

Van Nistelrooy made 70 appearances for the Dutch national side, scoring 35 goals.

He started his professional career with Dutch side Den Bosch, where he spent four years, before moving on to Heerenveen.

The following year earned him a transfer to Eredivisie giants PSV Eindhoven, where he made his name, winning the league title twice and establishing himself in the Netherlands national side.

Van Nistelrooy looked set to join Manchester United in 2000-01, but Sir Alex Ferguson called off the transfer due to issues with the striker's fitness. Within days, he broke down in training with ruptured cruciate knee ligaments.

But after making a full recovery, Ferguson came knocking the following summer and Van Nistelrooy signed for the Red Devils in a £19m deal.

He became a fans' favourite at Old Trafford, bagging 150 goals in 219 games, including 95 in the Premier League, winning the league title, FA Cup and League Cup.

After five successful seasons, he moved to Real Madrid where he won another two league titles, before spells at Hamburg and Malaga.