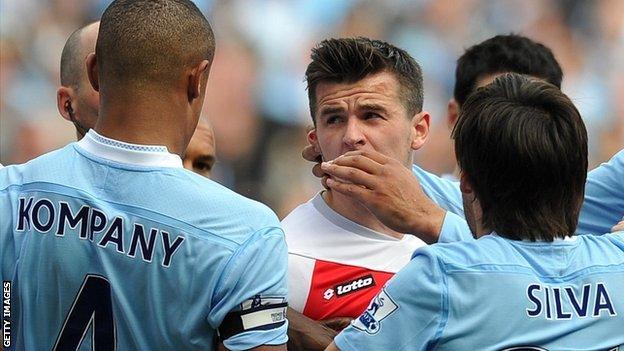 QPR's Joey Barton has accepted one Football Association charge of violent conduct, but denied a second.

The midfielder admits clashing with Manchester City's Sergio Aguero after being sent off on Sunday, but says he has no case to answer from a confrontation with Vincent Kompany.

Barton, 29, could be suspended for more than 10 games for the incidents.

In addition to a four-match ban for his second red of the season, each charge could carry a three-match ban.

The FA's regulatory panel also has discretionary to increase his suspension.

The incidents involving Aguero and Kompany came after Barton had been dismissed, meaning they fall outside the jurisdiction of the referee.

Taylor has previously offered Barton help through the PFA, but admits the former Manchester City and Newcastle man's latest misdemeanour could have a significant impact on his career.

"I just feel sometimes like it is pushing a boulder up a hill, it slips back and you decide whether to go again," Taylor said.

"We try to deal with Joey Barton and it is not getting any easier. It has certainly been a backward step for him and his future in the game.

"There are people that seem to be improving and then slip back, it is a human condition. No one is perfect but you only have one career."

Rangers chairman Tony Fernandes has refused to rule the midfielder out of playing for the Loftus Road club again, but insists time will be taken over any decision on his future.

"There are experienced people who will come back to me and we'll review the whole situation," he told BBC Sport.

"There's a process that the club goes through in terms of sendings off and disciplinary action. That's something [manager] Mark Hughes will report through to the board.

"I'd rather not focus too much on that at the moment, because it's down to the club to do the investigations and get all of the information. We want to focus on the positive things. We'll wait and in due course our views will be known."

Barton was shown a straight red card for catching Tevez with an elbow but then struck Aguero, confronted Vincent Kompany and had to be pulled away from Mario Balotelli after being restrained by Micah Richards during the 3-2 defeat at the Etihad Stadium.

The one-time England international has apologised for his actions via Twitter and Fernandes believes the club's captain has been vital in keeping them in the Premier League.

He said: "Joey has been an integral part of the club and has played his part. Cisse has been sent off twice, and I think he was critical for us in terms of getting goals.

"This is football, and I'm new to it. I don't profess to have all the answers."

The removal of Warnock only eight months after he had guided Rangers to promotion provoked plenty of criticism.

But asked whether the decision was proved to be correct, Fernandes added: "I've got to say it has because we're still in the Premier League, which was the whole objective.

"Mark is the man. Look at his interview at the end of the season. The passion and wanting to make sure we're never again in that position in my view vindicated what we have done.

"We go into next season looking forward, and it's much easier mentally to carry on the journey. Relegation would have been painful."