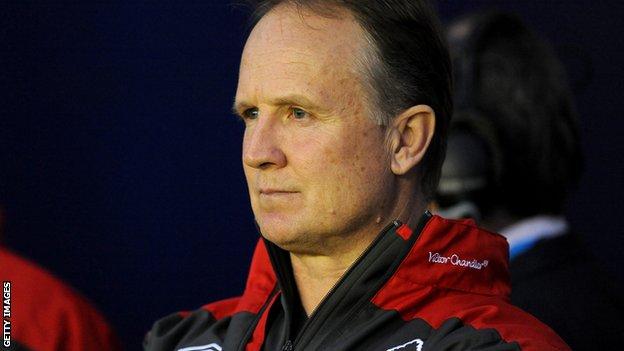 Crawley Town have appointed Sean O'Driscoll as their new manager.

The former Bournemouth and Doncaster Rovers manager has been coaching at Championship side Nottingham Forest since January.

He said: "I did a lot of due diligence on Crawley Town before I decided to accept the club's offer.

"I have been impressed with the owners and people behind the scenes and I am looking forward to helping the club establish itself in League One."

He added: "Crawley is a good fit for me. They are a club trying to do things the right way.

"This is a challenge I am really looking forward to.

"My football philosophy is to improve players and the way they think about the game.

We are convinced we have made the perfect appointment

"Going from League Two to League One is quite a jump but I'm looking forward to getting started."

Craig Brewster guided the Reds to promotion this season after taking over as caretaker when Steve Evans joined Rotherham in April.

The Scot will remain on the coaching staff at the Broadfield Stadium.

Crawley chief executive Alan Williams said: "We are convinced we have made the perfect appointment.

"Sean brings with him a wealth of experience and a track record of success which matches the ambition of this football club.

"Our director of football Steve Coppell worked extremely hard identifying Sean as the ideal candidate and thanks to his hard work we have been able to bring him to the club."

The west Sussex club have confirmed that former Reading and Brighton manager Coppell will stay in his role as director of football.