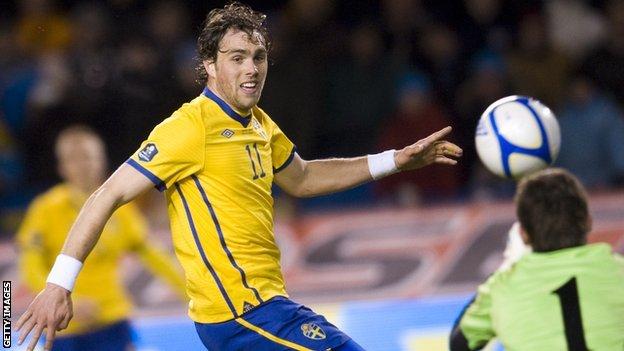 Striker Johan Elmander has been called up to Sweden's 23-man Euro 2012 squad despite a fractured metatarsal.

The 30-year-old former Bolton man suffered the injury in Galatasaray's win over Fenerbahce on Saturday, but is expected to be fit for the tournament.

Blackburn's Martin Olsson, West Brom's Jonas Olsson and Sunderland's Sebastian Larsson are the English-based players to have been selected.

The Swedes meet England, Ukraine and France in Group D.

There is no place in the squad for Manchester City teenager John Guidetti, who spent the season on loan at Feyenoord, scoring 20 goals as the Rotterdam club came runners-up to Ajax in the Eredivisie.

Celtic centre-back Daniel Majstorovic also misses out having ruptured knee ligaments during the season, however, team-mate Mikael Lustig is included.

Former Aston Villa defender Olof Mellberg is selected, as is ex-Wigan man Andreas Granqvist and Andreas Isaksson, previously of Manchester City, is likely to be the number one goalkeeper.

The side will be captained by AC Milan forward Zlatan Ibrahimovic, whose side came runners-up to Juventus in Serie A.