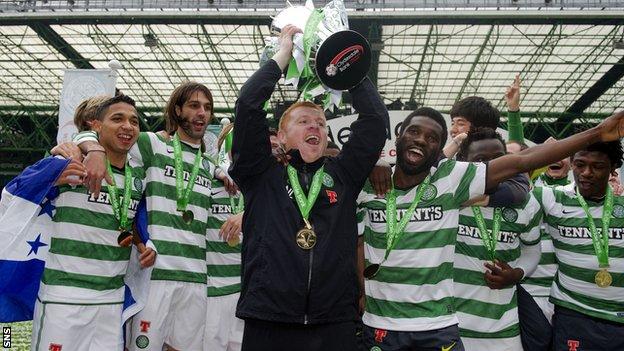 Celtic legend Pat Bonner thinks manager Neil Lennon will concentrate on strengthening the spine of the team for a tilt at Europe next season.

The former goalkeeper, who made more than 600 Celtic appearances said that Lennon will already be working hard on a list of signing targets.

And Bonner believes a midfield playmaker, striker and experienced central defender will top the agenda.

"Europe is such a big goal for Celtic," Bonner told BBC Scotland.

"Winning the league has sent out a message to everyone that they're back and I think Neil Lennon has built a really good young squad.

"He'll have to add a couple and move a few out."

Celtic will need to negotiate two qualifying rounds if they are to reach the Champions League group stages for the first time since season 2008/09.

"Fans will demand success in Europe and it's hugely important to get through the qualifying rounds," added Bonner, who played at two World Cups with the Republic of Ireland.

"Neil knows he has the backing of the supporters and the board but the hard work starts now.

"He will want to be focused right from the start of next season and not have his team lacking in fitness or sharpness.

"He'll be thinking about bringing in players and he'll want to get that business done as quickly as possible.

"He's got an enormous squad, so he'll need to trim before he can add. Celtic no longer have the huge reserves to go out and spend £10m or £15m.

"I'm sure he knows himself who he would like but I would like to see someone in the middle of the pitch who can go and pass really good balls for people making runs from the likes of Gary Hooper and Kris Commons.

"They possibly need a striker too. Someone who can take the weight off Hooper, while playing alongside him.

"Georgios Samaras has done well but he's not an out-and-out goalscorer.

"They also maybe need someone who can give the rest of the younger players the confidence to build the game from the back.

"They did that well last year but didn't win the championship. This year it's been a bit more direct.

"But, if they want to be effective in Europe they may need to get a player in who has real character and also the ability to play out from the back."

Bonner recognises that Celtic may have to sell players to fund the arrival of new recruits but he thinks the club will resist offers for top scorer Hooper.

"They were lucky last year to move Aiden McGeady on for £9m," explained the 51-year-old.

"Celtic are no longer a team that can hold on to all of their talent. If someone comes in with a ridiculous bid, they may have to sell to finance the restructuring of the team but I'm sure Neil wants to keep a 29-goal striker - that takes a lot of money to replace.

Bonner has also been impressed by goalkeeper Fraser Forster, saying of the loanee from Newcastle: "He grew in confidence as the season went on.

"He's such a big guy, he has to work hard on getting down quickly and moving around his penalty box.

"Neil wants him back and he'd like to get that deal done and dusted for the sake of continuity."