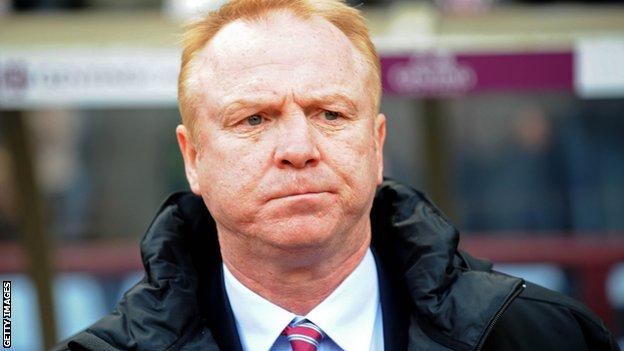 It's always sad when a good football man takes the rap for the deficiencies of others but Alex McLeish is big enough to come back from this bitter disappointment.

He will be handsomely compensated financially but getting sacked by Aston Villa will be a major setback to his professional ambitions.

The 53-year-old Scot has always wanted to be a consistent managerial success in England, yet his record in English football is patchy.

In 152 Premier League matches with Birmingham and Aston Villa, he has accrued only 162 points and his teams have scored only 158 goals.

It was that frugality that frustrated the Villa fans far more than his Birmingham City connections.

The statistics from McLeish's tenure at Villa Park are grisly. Here are a few of them:

Indeed, if Andi Weimann had not scored with a tap-in in stoppage time in the recent home match against Fulham, Villa would have finished with the same points as Bolton and liable to have achieved the unthinkable - relegation.

McLeish was justified in mentioning the lengthening injury and illness list towards the end of the season but he had a full complement of players to choose from in the first six months of the campaign, when they lost too many points - 22 - from winning positions.

Only 37 goals in 38 games underline the poverty of fare that the Villa supporters had to endure.

With crowds at Villa Park down 9% on last season - only Blackburn had a worse record in the Premier League - and with season ticket sales sluggish so far, owner Randy Lerner donned his pragmatic businessman's hat and acted swiftly.

But the players have to look at themselves. They have enough internationals and experience in their midst as well as a promising crop of youngsters to realise they should have done far better than finish 16th.

And as for Lerner, as he faces working with a fourth full-time manager in less than two years, he should be wondering how much credibility he has lost with the Villa supporters.

It would be good to hear Lerner give a thorough briefing to the fans via the media but I am not holding my breath.

He has not spoken to radio or TV since taking over in September 2006 and has not given a press conference since May 2010, when Martin O'Neill was manager.

Lerner certainly has a lot of questions to face if he holds a press conference this summer.

I wonder if that will happen?