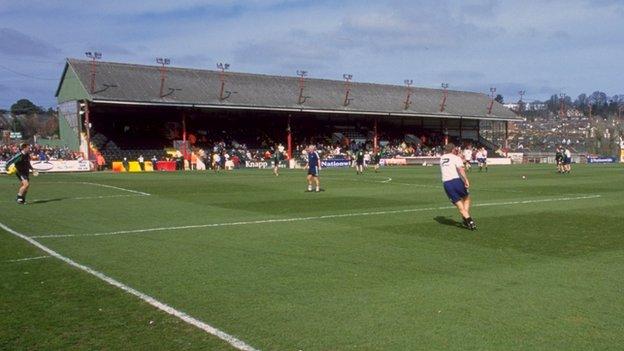 A former chairman of Exeter City has called on the Trust that owns the club to be more transparent in the way it makes decisions.

David Treharne is also a former member of the Exeter City Supporters Trust, which bought the club in 2003.

He says the Trust should have consulted supporters over plans to change the way it gives money to the club.

Due to financial rules in League Two, the Trust has changed its funding from a loan to a donation.

League Two rules state a club cannot spend more than 55% of its turnover on player wages and a donation does not count towards turnover, while a loan does.

"The membership weren't asked about that at all, it just happened," Dr Treharne told BBC Sport.

"The money that has been handed over could have been used as a loan to pay for shares."

Exeter City supporters pay to join the Trust, which hands over around £100,000 every year to the club.

Members of the Trust then elect people to the Board of Society, which runs the Trust on members' behalf.

"The Trust has made the decision to help the manager build a really good team to push for promotion out of League Two next year," trustee Roger Conway told the BBC.

"To do that we need to maximise the amount of money we can put into the playing budget.

"The rules the Trust operate under clearly give the board of the Trust the right to do this."

But Dr Treharne says the issue is so important that Trust members as a whole should have been consulted, as a loan to the club could be repaid or swapped for a larger shareholding while a donation has no value once it is spent.

"What I'm concerned about is the way it appears to have been done without any consultation at all and without anything given back from the club board," he said.

"I think the membership should have been approached to discuss this matter at least."

But Mr Conway disagrees with Dr Treharne's notion that the Trust as a whole should have been consulted.

"It's a funny democratic process where you feel that every decision should be referred back to everybody to have their say."