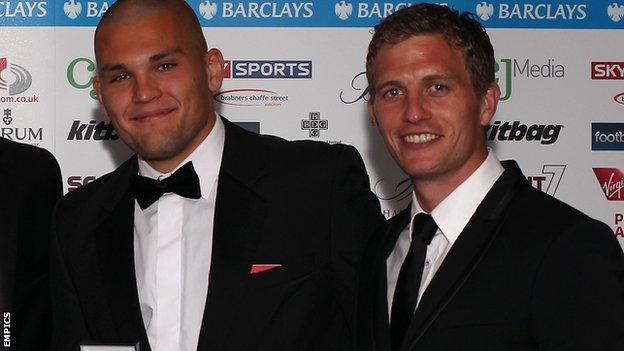 Torquay United captain Lee Mansell and goalkeeper Bobby Olejnik both believe the club can turn around their two-goal deficit in the League Two play-offs.

The Gulls went down on Sunday in the first leg, but both players feel the Gulls can turn their fortunes around.

"It's not over at 2-0. We created the majority of chances and we didn't put them away," Mansell told BBC Devon.

"Everyone in the dressing room is saying it's possible," Olejnik added.

Torquay hit the bar through Ryan Jarvis and Mansell says he expects his side to create more opportunities to score goals at Plainmoor.

"I believe they'll give us more chances, I don't feel they're better than us," Mansell said.

"We've got chances in us. We just have to take them and keep them out, but we've set ourselves up with a difficult task on Thursday."

And Olejnik, who has kept 20 clean sheets this season, says the club have come back from bigger deficits this season thanks, in part, to the support of their fans.

"We've got the belief and I hope the fans have the same belief because we've come from two or three down in one half before, so it's definitely possible," Olejnik said.

"We've had the fans lift us before. They've lifted us and the amount of draws we've had form being two goals down, they're huge in lifting us, so we'll be counting on them big time."