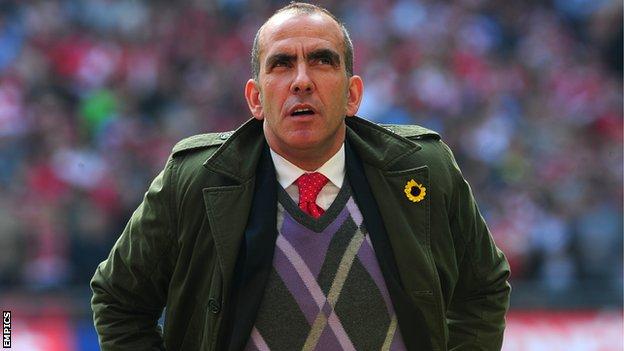 Tehoue joined the Robins on loan from Leyton Orient on 7 March.

But after making just one start and two substitute appearances, Di Canio said the 27-year-old Frenchman had no future with the League Two champions.

"He's not as good as I thought he was. I have much better players than him in the way I want them to play and behave

The club have released a statement saying Di Canio "completely denies" the allegations.

It read: "The board was fully appraised of the facts at the time of the alleged incident back in March and having investigated it, was satisfied that it was without merit and took appropriate action then.

"Paolo Di Canio denies completely any suggestion that he used toward Jonathan Tehoue or anyone, abusive, insulting or threatening words or behaviour by reference to race or at all and the board wishes to affirm its complete and unequivocal support for its manager in this regard.

"Further, the board is wholly satisfied that any decisions concerning Jonathan Tehoue's playing career whilst at Swindon, were made for purely footballing reasons.

"The club will of course however happily assist the FA in its enquiries."

Speaking to BBC Wiltshire last month, Di Canio said that Tehoue's omission from the Robins squad was a "technical decision", adding: "He's not as good as I thought he was.

"I have much better players than him in the way I want them to play and behave."

It is thought Tehoue left Swindon after the alleged incident and returned to France.

He is out of contract at Orient in the summer and is set to be released from the League One club after falling out with manager Russell Slade.

Di Canio was named LMA League Two manager of the year on Tuesday, after leading Swindon to promotion in his first year in charge.