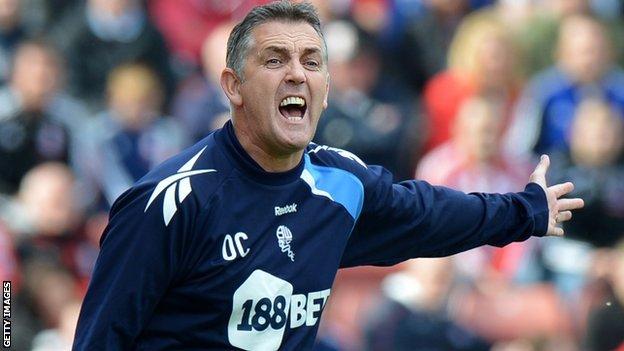 "I want Owen to stay and I'm certain he will stay," said Gartside. "We've formed a good working relationship and I respect the way he works.

"He's been very unlucky this year. He's a young manager, he's learned a lot and we've invested in that."

Coyle, 45, is a former Bolton player and took over from Gary Megson as manager at the Reebok Stadium in January 2010, guiding Wanderers to a final position of 14th in both of his first two seasons in charge.

But with a number of serious injuries to contend with this term, Bolton could not escape the drop to the Championship.

"The experiences we've all had this year have been unique and unprecedented," continued Gartside. "These are not excuses, they are reasons.

"During the season, we've had 15 trauma injuries, including four broken legs. I've been on the board for nearly 30 years and I've never seen a season where we've had such a horrendous injury list.

"We've never moaned about it and we've had to deal with it."

A number of first-team players, including club captain Kevin Davies, are out of contract in the summer.

Veteran striker Davies has expressed a desire to stay, but Gartside said it is inevitable players will be leaving as Bolton prepare for life in the second tier for the first time since 2001.

"You have to plan for these things. It's not something that you can afford to leave without any thought before the event," he added.

"We've had two plans every year. The reality of a club like ours is that, until near the end of the season, you're never really sure where you're going to end up.

"The players that are out of contract this year are mostly senior pros, which means they are, more than likely, the higher paid ones.

"We'll be able to reduce our wage bill significantly next year by as much as 50%."