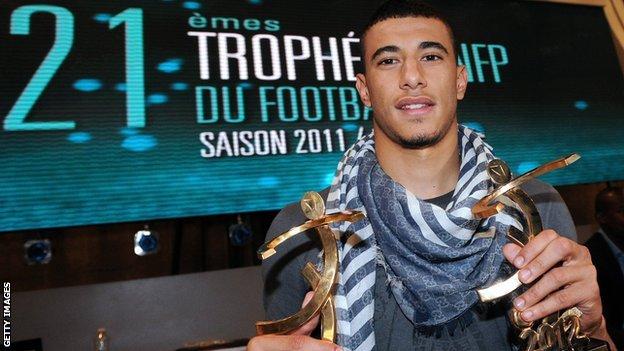 Morocco and Montpellier midfielder Younes Belhanda was named France's Young Player of the Year on Monday.

He lost out to Lille's Eden Hazard for the main Player of the Year prize, the Belgian also won the award last year.

It is Belhanda's second prize of the season, after being named France's African Player of the Year last week.

Players and coaches in France's top two divisions vote for the awards which are handed out by the National Union of Professional Footballers (UNFP).

There was also recognition for the Cameroon duo of Henri Bedimo and Nicolas Nkoulou, as both were included in the Ligue 1 Team of the Year, alongside Belhanda.

Bedimo and 22-year-old Belhanda have helped Montpellier to the verge of a first ever French League title.

They are three points clear of Paris St-Germain, going into the final weekend of the season.

Nkoulou has impressed in defence for Marseille this season despite them only managing to finish in mid-table.

Kassim Abdallah from the Comoros Islands, Guinea's Abadoulaye Sadio Diallo, Cape Verde's Ryan Mendes as well as Algeria duo Fethi Harek and Karim Ghilas were all included in the Ligue 2 Team of the Season.