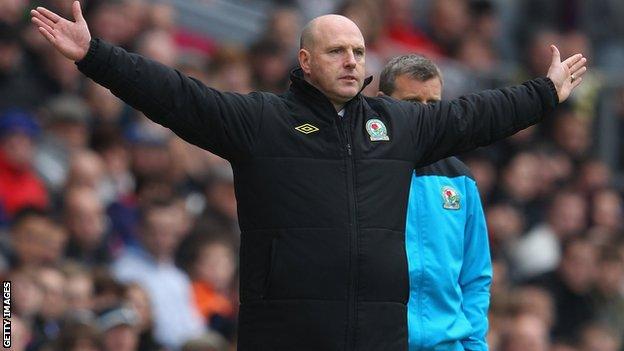 The future of Steve Kean as Blackburn manager remains uncertain following two days of talks in India with the relegated club's owners Venky's.

Kean was subjected to numerous protests from Rovers fans last term and his role has been under increasing scrutiny.

This week a video emerged that was shot last summer, which apparently shows Kean promising fans a top 10 league finish and a Carling Cup triumph.

13th in the Premier League when Kean takes charge in December 2010.

Relegated to the second tier after losing eight of the last nine league games.

West Ham manager Allardyce is in talks with his lawyers over whether to pursue legal proceedings against Kean, who met co-owner Anuradha Desai in Pune this week to discuss his plans for the future of Blackburn.

Rovers ended the season 19th in the table, six points from safety.

Fans called for Kean, who took over when Allardyce was sacked in December 2010, to be dismissed long before the end of a poor season.

Yet the clamour for Kean's removal has since gathered pace, with more than 4,000 supporters signing a petition calling for the 44-year-old's exit.

The four minute clip on the internet, filmed during last summer's pre-season tour in Hong Kong, is likely to prove potentially damaging for Kean, a member of Allardyce's backroom team before he was promoted to manager.

Not only were Rovers relegated, they were knocked out of the Carling Cup in the fifth round by Championship club Cardiff.

Kean said before last Sunday's final game of the season at Chelsea, which ended in a 2-1 defeat, he would not resign.

"When I go out and speak with the owners, we will talk about what went on last season and the rebuild programme will stay within the club," he added.

"We will move forward.

"I will be going out to speak to the owners and will be continuing the talks we have already had and build as competitive a squad as we can."

The fans' group campaigning for the removal of Kean have been granted meetings with government and the Premier League to air their concerns.

Blackburn MP Jack Straw has facilitated a meeting of the fans with sports minister Hugh Robertson next month while the Premier League have agreed in principle to meet them too.

Glen Mullan, BRFC Action Group chairman, said: "This will give us an opportunity to put our case to the highest authorities and offer supporting evidence to why we feel that our club's activities has not been monitored at all.

"This will include agent's roles during their [Venky's] ill-fated tenure and lack of administration structure at the club."