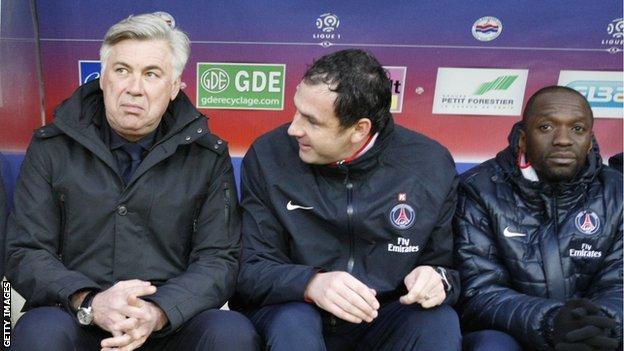 Paris remains one of the world's most popular tourist destinations, yet few spots in the French capital can claim to be as cosmopolitan as the Camp des Loges these days.

Paris St-Germain's training complex has become a melting pot of different languages and cultures since the club was purchased by the Qatar Sports Investment group last year.

Now owned by Qataris, PSG have an Italian manager in Carlo Ancelotti, a Brazilian sporting director in Leonardo and a distinctly multinational squad.

The loudest voice around, however, tends to be that of an Englishman: the training ground is Paul Clement's domain and Ancelotti's assistant coach is not shy in bellowing out instructions in his rather raw French, coloured with a thick London accent.

PSG's wealthy backers have sought to assemble a technical team of leading experts in their field as they bid to turn the French outfit into a European power.

In the midst of such distinguished company the presence of Steve Kean's former number two at Blackburn may surprise some, yet Ancelotti describes the 40-year-old as "one of the most dynamic and intelligent coaches" with whom he has worked and did not hesitate in contacting Clement following his appointment last Christmas.

Clement had already spent two seasons alongside Ancelotti at Chelsea - notably helping the west London club win the double in 2009-10 - and admits he was hoping for another chance to collaborate with the former AC Milan boss.

"I left Blackburn with regrets," Clement told BBC Sport. "But I knew that teaming up with Carlo again was an opportunity I couldn't turn down. We had some great times at Chelsea and now we're really enjoying this very different challenge at PSG."

Unlike his father David, who played with distinction for Queens Park Rangers and England, and his younger brother Neil, who spent a decade at West Brom, Paul Clement did not play professionally.

He had a brief stint in non-league football before focusing fully on his passion for coaching from the age of 23, combining work as a PE teacher with a role at Chelsea's centre of excellence. In 2000, he landed his first full-time position with Fulham before Chelsea called him back in 2007.

Bright and ambitious, Clement quickly climbed the ladder back at Stamford Bridge, starting as Under-16 coach before graduating to the youth team, the reserves and getting a chance to work with the first team when Guus Hiddink arrived as caretaker boss.

"Working with Guus was an incredible experience for a young coach," he enthused. "He's right at the cutting edge of the profession."

Operating alongside the Dutchman as Chelsea won the FA Cup and narrowly missed out to Barcelona in an epic Champions League semi-final proved an eye-opener. "Guus had such fantastic charisma. He really knew how to capture an audience and was a great motivator and influencer of people."

Hiddink's linguistic skills also made an impression. "He could change languages at the click of the finger," Clement added. "That's important nowadays because of the global nature of football. Modern managers should ideally speak at least two languages."

Clement is trying hard to immerse himself in French, although he admits it isn't easy with the likes of Leonardo, Ancelotti and fellow assistant Claude Makelele around. "They all speak English, which is good but also bad because it means I don't always have to speak French. But I'm having three lessons a week and I'm determined to learn."

Few current English coaches can boast a CV as rich and varied as Clement's. As well as working with two of the most successful managers of the modern era and tasting life in a foreign league, Clement has spent time observing the coaching methods of leading teams in European and American sport. He also possesses international experience having trained the Republic of Ireland Under-21s for three years with Don Givens.

Like Swansea manager Brendan Rodgers - with whom he passed his A licence in 1999 - Clement fits the profile of a promising, young British manager perfectly and hopes to one day emulate his Northern Irish friend. "I'd like to think there's a chairman out there who will look at me and think 'he's had a good apprenticeship'.

"Some chairmen still like the traditional style of manager but others prefer a more innovative coach with fresh ideas; somebody with a thirst for learning what's out there, who's travelled the world looking at different methods. I certainly hope more clubs will give opportunities to younger coaches like Brendan."

In the meantime, Clement will try to go on winning trophies with Ancelotti. The pair could become French champions on Sunday, although PSG trail leaders Montpellier by three points ahead of the final round of matches. "We just have to make sure we beat Lorient so that we don't have any regrets," Clement stressed.

Whatever happens, the future will continue to look bright for both PSG and their young English trainer.