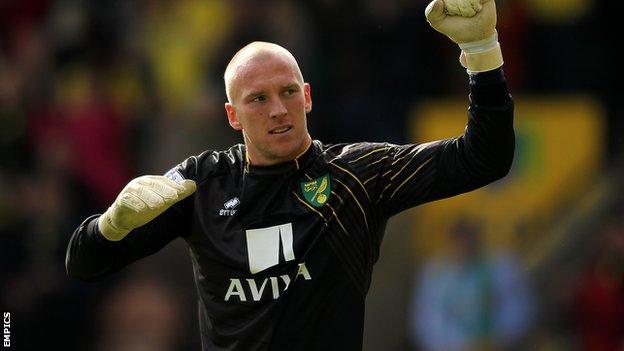 Norwich duo Grant Holt and John Ruddy have backed each other for call-ups to England's European Championship squad.

Keeper Ruddy and striker Holt have played central roles in guiding the Canaries to mid-table safety in the Premier League.

Holt told BBC Radio Norfolk: "There's no-one better. Apart from Joe Hart, who else is there?"

Keeper Ruddy said of Holt's chances: "If he doesn't go something needs to be looked at there."

Holt, a former Shrewsbury, Rochdale and Nottingham Forest forward, has notched 15 top-flight goals this season, staking a surprise claim for Roy Hodgson's squad as the second most prolific Englishman in the division.

"I think he's on team Ruddy and I'm on team Holt. I can't see why he doesn't deserve to go," said Ruddy of the 31-year-old, ahead of Wednesday's England squad announcement.

"Fingers crossed now he can take his form into the Euros. People doubted him. He's scored the goals when people didn't fancy him."

Ruddy, 25, a signing from Everton two years ago, was kept busy throughout the campaign, making 216 saves, and kept his third clean sheet of the season in Sunday's 2-0 win over Aston Villa.

Hart is expected to be Hodgson's choice for the number one shirt, but with Blackburn's Paul Robinson and Birmingham's Ben Foster in international retirement, places for the final two keeper spots could be up for grabs.

"If there's anyone better than John Ruddy in this league come and tell me - I'll have an argument with anyone," said Holt.

If John Ruddy does earn an England call, he will have to reschedule his summer wedding.

Holt said: "Hopefully he'll get a call and that will stuff his wedding up.

"He's that tight he'll hate if it ruins his wedding plans."

But Ruddy has the situation in hand, saying: "I've got wedding insurance. I'm covered in that respect."

"There's talk about other people coming out retirement, but they shouldn't have done it in the first place. You shouldn't quit on your country."

And Ruddy expressed frustration over midfielder Wes Hoolahan's omission from the Republic of Ireland squad.

The playmaker, who has also impressed this season, earned his only international cap against Colombia four years ago.

"How we hasn't even been in the provisional squad is beyond a joke," said Ruddy.

"He's been playing like that for the two years I've been here and how he hasn't been in a single squad is beyond me. He'd probably be Ireland's most productive player."