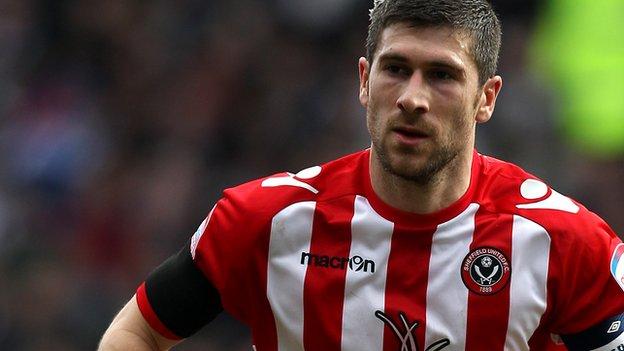 Sheffield United's Nick Montgomery believes they are due promotion through the play-offs, ahead of what will be his third final with the club.

The 30-year-old midfielder came off the bench to play the second half in the 1-0 win over Stevenage on Monday.

He was an unused sub in the side beaten by Wolves in 2003 and played the full match in the defeat by Burnley in 2009.

"Hopefully for me it's going to be third time lucky but we know we haven't won anything yet."

Having had a loan spell at Millwall cut short by injury, the Blades veteran was candid about his struggles this campaign.

His substitute appearance on Monday was his first action for United since 10 March.

"I've had probably the worst season since I signed for the club," he continued.

"Its been well documented that I've had some problems off the pitch as well and it's been a tough 12 months.

"Kenny Jackett asked me to go to Millwall to help them stave off relegation and the intention was to go there and play five or six games but I tore my calf for the first time in my career. That was probably the lowest point of my career."

Montgomery was made skipper by Gary Speed during the late Wales manager's brief spell in charge at Bramall Lane last season.

And the Blades midfielder believes United winning promotion would be a fitting tribute to his old colleague.

"Hopefully Speedo will be looking down on us and it'll give us that little boost at Wembley," he added.

"It was devastating news, I played with him and he made me captain. He'll always have a place in my heart. If we can win this game for anybody then it'll be for him."

The Blades face Yorkshire rivals Huddersfield Town on Saturday, 26 May for a place in the Championship.