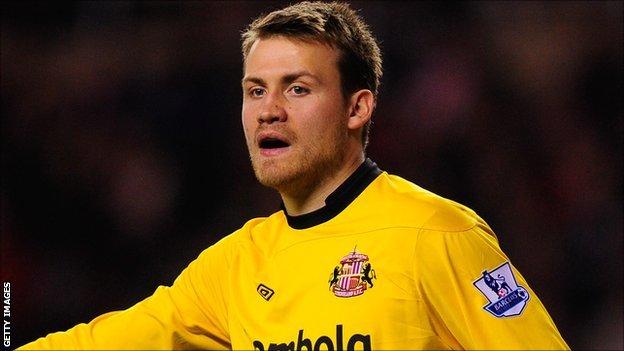 Sunderland manager Martin O'Neill has backed Belgium goalkeeper Simon Mignolet to impress in the friendly with England next month.

Mignolet, 23, made his international debut in March 2011 but misses out on the European Championships as his nation did not qualify.

"He's a really good lad who wants to do well, he loves the training," O'Neill told BBC Newcastle.

"I really hope he has the chance to go and shine in the game."

Former Black Cats boss Steve Bruce signed Mignolet from home-town club Sint Truidense in June 2010, and the player has since made 61 first-team appearances.

Meanwhile O'Neill, who took over as manager from Bruce in December, guaranteed a sixth straight season of Premier League football with a mid-season run of form.

However the Northern Irishman is convinced there is potential to build upon at the Stadium of Light over the forthcoming seasons.

"The football club has proper claims to be better," O'Neill added.

"That's really what it is about, we as a team aren't that yet, but the club is.

"Even in this day and age when it looks as though you can buy the title if you have the money."