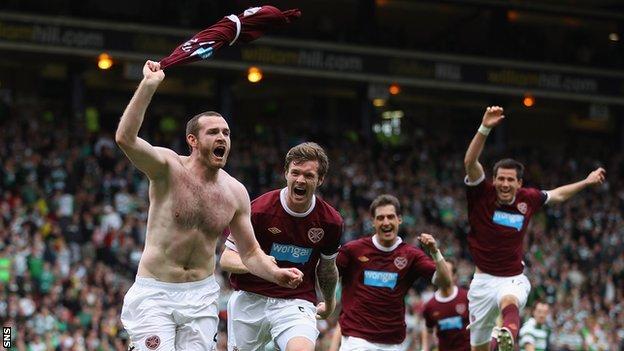 Hearts striker Craig Beattie is confident he will be fit in time for Saturday's Scottish Cup final against Hibernian at Hampden.

The former Celtic, West Brom and Swansea forward scored an injury-time penalty that gave the Tynecastle side victory over Celtic in the semi-final.

But he has missed Hearts' last three Scottish Premier League games with a hamstring injury.

Beattie, 28, joined Hearts at the end of February until the summer.

"I'm working hard this week with the physios and I am confident I'll be fit," Beattie told BBC Scotland.

"The build-up is just starting. The players have been concentrating on the league. We only secured the Europa League spot on Sunday.

"The atmosphere will start to build now and the boys are looking forward to it."

Beattie has since made six starts in maroon, with another two from the bench, and will leave contract discussions until after the cup final.

"I have not had any dialogue with the club yet. It is unfair to talk about myself before such a game," he said.

"I've been around the Scottish game for a long time and I know what a big club it is.

"They've had well documented problems but that wasn't an issue for me.

"I wanted to come and play football, a platform to show what I could do. I feel I have done that."

BBC Radio Scotland's Sportsound continues the Scottish Cup final build-up live from Tynecastle on 15 May, 1810 BST, and at the same time from Easter Road on Thursday.