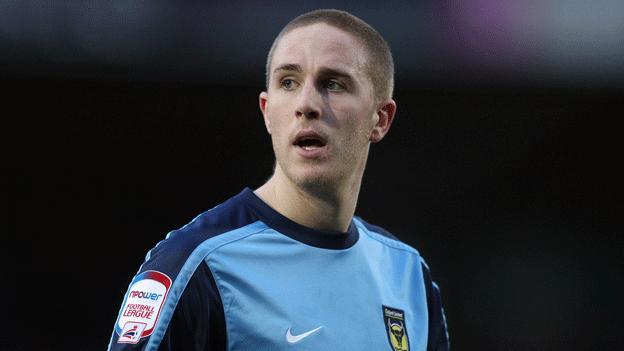 Promoted Shrewsbury have made their first purchase of the summer by signing Oxford's Asa Hall on a free transfer.

The ex-Birmingham City midfielder, 25, who will join Town on 1 July, is to start his second spell at the club, having first signed on loan in 2008.

"As soon as I knew Shrewsbury were one of those interested, it was always going to be them for me," Hall told BBC Radio Shropshire.

"I know the club in and out and I enjoyed my time there."

Hall added: "I've grown up a lot since then. I've had a lot of experience in the league and it's made me a better player.

It was a tough decision to leave Oxford. But League One football is a massive pull

"I'm hungry to get back out there.

"It was a tough decision to leave Oxford. I've had two great years there.

"But the attraction was to join Shrewsbury. It's closer to where I live and League One football is a massive pull."

Hall could have joined Shrewsbury following his loan spell four years ago (in which he netted three times in 15 games), only to join Luton Town instead.

After the Hatters missed out on promotion, he went back into the Football League with Oxford in 2010.

But, after two years at the Kassam Stadium, in which he scored 11 times in 82 appearances, the former England Under-20 international rejected a new contract.

"I am delighted that Asa will be joining us in July," Shrewsbury manager Graham Turner told the club website.

"He had an impressive spell on loan here and I've always been impressed with his ability and attitude to work.

"He is starting to build up a reputation for scoring long-range spectacular goals. And I look forward to working with him."