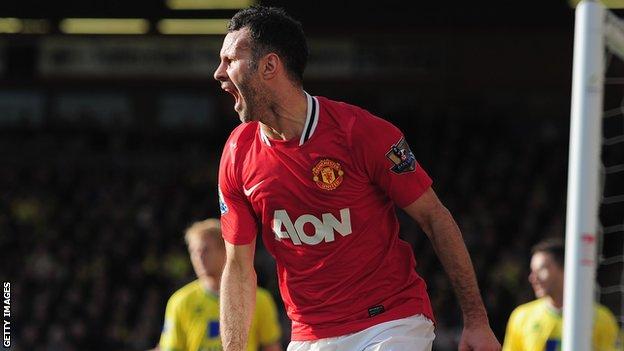 Manchester United veteran Ryan Giggs has been named the greatest player of the Premier League era.

And in an Old Trafford double, boss Sir Alex Ferguson has been selected the Premier League's greatest manager.

The Premier League 20 Seasons Awards honour the players, managers and football that has taken place over the two decades.

Ferguson, 70, has steered United to 12 Premier League titles, the same number 38-year-old Giggs has won as a player.

Giggs beat off competition from team-mate Paul Scholes as well as former Arsenal players Thierry Henry and Dennis Bergkamp to clinch the vote from a panel of experts.

The most decorated player in the English game said after picking up the award that he enjoys playing "more than ever" - despite the bitter disappointment of missing out on a 13th title.

"It's disappointing not to win the title, but it has been an exciting season," Giggs, who finished the season with four goals, including the last-minute winner at Norwich on 26 February, told Sky Sports News.

"But we're obviously gutted, although we're proud of the way we've played this year. There are a lot of positives to take from this season.

"I have enjoyed the 20 seasons - that's why I'm still playing, I enjoy it more than ever. I will go on as long as I'm still enjoying it and I'm getting picked.

"I feel good at the moment."

"I've known him since I was 13," added Giggs about Ferguson.

"He knew my name, my parents' names and the little details had a big impression on me. It's the personal touch that sets him apart from anybody else.

"He's the biggest influence on my career."

United chief executive David Gill said the awards for Giggs and Ferguson illustrated the club's domination of the Premier League over the last two decades.

"It's a fantastic double. This is testament to what the club has achieved over the last 20 years," added Gill.

Meanwhile, two other players were recognised for their record-breaking contributions to the Premier League with merit-based awards.