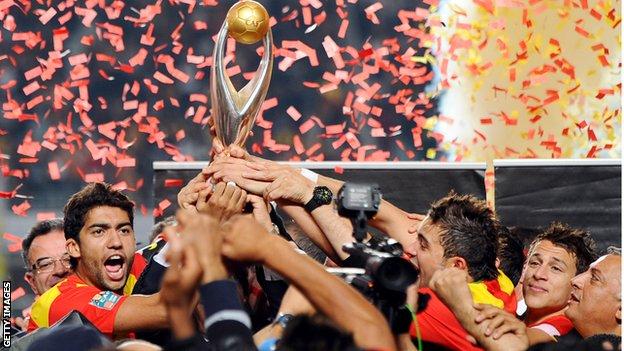 Cairo giants Al Ahly and Zamalek have been drawn together in the group stage of the African Champions League.

The Egyptian pair are joined in Group B of the competition by newboys Berekum Chelsea of Ghana and multiple former winners TP Mazembe from DR Congo.

Reigning champions Esperance will face their fellow Tunisians Etoile du Sahel in Group A, along with Sunshine Stars of Nigeria and AS Chlef from Algeria.

The draw was made at Caf headquarters in Cairo on Tuesday.

Ahly were the final team to qualify for the last eight of the competition with victory over Stade Malien on Monday.

Ahly and Zamalek are perennial rivals but their games in this year's competition will come under extra scrutiny because all domestic football in Egypt has been cancelled by the authorities.

Fans are currently prevented from attending any football matches, despite calls from the Egyptian Football Association for that ban to be lifted for matches featuring an Egyptian side against teams from elsewhere.

Ahly and Zamalek last met in the Champions League group phase in 2008, when Ahly topped the pool and went on to win the title for a record-breaking sixth time.

Security will also be an issue for the Tunisian derby in Group A - with domestic matches in the country also being played behind closed doors on the orders of the authorities.

In the Confederation Cup reigning champions MAS of Morocco, who dropped into the competition after losing in the last round of Champions League, will take on AC Leopards of Congo Brazzaville in the last 16.

The winners of these two-legged ties will then go forward to the group phase of the continent's second-string competition.