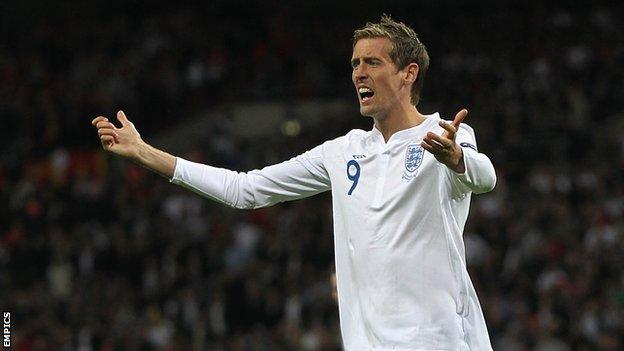 Hodgson was confirmed in the national job on 1 May and has had just a fortnight to finalise his selection.

"He is a proven goalscorer at international level," Lineker said.

"I would be surprised if Crouch is not in the squad. I would definitely consider him."

The 31-year-old former Liverpool striker, who has scored 14 goals this season and has 22 in 42 international caps, fell out of favour with previous coach Fabio Capello but could now return to the international scene.

Match of the Day presenter Lineker added: "With Crouch there is a tendency to want to hit long balls, which doesn't really work at that level.

"But it is only because he is so big. Technically, he is a decent footballer."

Fellow strikers Darren Bent and Danny Welbeck are hoping to feature after ankle problems and Andy Carroll, Jermain Defoe, Daniel Sturridge, Bobby Zamora and Grant Holt could all be in contention for the forward berths.

"Oxlade-Chamberlain should go. When he has played in midfield or on the wing, he has looked threatening and his crossing is good" - former England winger Chris Waddle

Midfielder Scott Parker, who captained the side in the 3-2 defeat by the Netherlands last time out, is doubtful for the tournament with an Achilles injury.

Hodgson's defensive selection will also attract plenty of focus, with the news that Rio Ferdinand is set to miss out after an injury-hit season, while Kyle Walker will be absent with a toe injury.

Jack Wilshere,Chris Smalling and Michael Dawson are all ruled out through injury and goalkeeper Ben Foster, who worked with Hodgson at West Brom this season, has reiterated he does not want to be considered for selection.