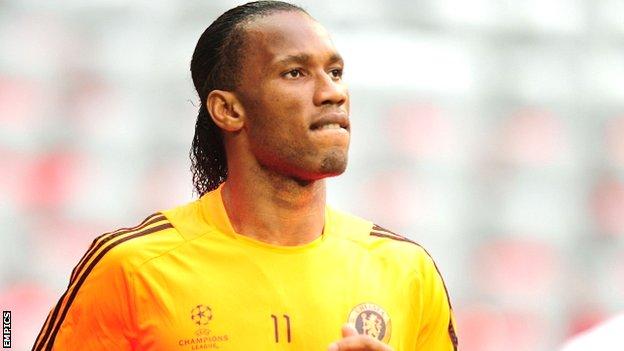 Didier Drogba deflected speculation he could be set for his Chelsea farewell and insisted his sole focus is on finally winning the Champions League.

The 34-year-old striker is out of contract at the end of the season and Chelsea have so far refused to grant him the two-year deal he has requested.

"The most important thing is to win the game, no matter what happens," he said.

"I am just happy because we are in a Champions League final again and it is fantastic for the club."

Drogba - sent off when Chelsea lost on penalties in the 2008 final against Manchester United in Moscow - could be facing the prospect of playing his final game for Chelsea against Bayern Munich in the Allianz Arena on Saturday after a glittering eight-year career.

He insisted he was still ready to talk to Chelsea about extending his stay, but said: "Everybody is talking about the last game but I don't really think about this because the Champions League final is so important.

"We have been waiting four years to be in it again and it is a situation to be able to put this club at the top of European football. This is what is important - not my contract and not my future.

"The most important thing is the team. I want to give everything to the team and the fans like we all do, then we will see what happens."

And Drogba believes that chance for Chelsea to win the trophy for the first time will be the final answer to those who criticised the side after a poor start to the season.

He said: "It has been a difficult season at times and we have been through a lot of criticism but that's football. When big teams don't perform like you expect them to perform then they will be criticised.

"It is normal but we have managed to show everyone that we are still a very good team."