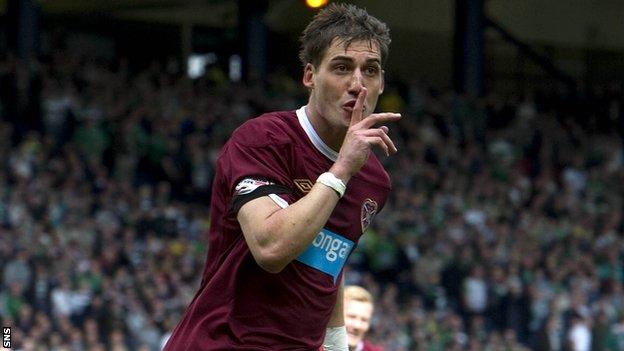 Club legend John Robertson thinks Rudi Skacel can bid the perfect farewell to Hearts by bringing the Scottish Cup back to Tynecastle.

The Czech midfielder will be out of contract after Saturday's final with Edinburgh rivals Hibernian.

"You look for big players to do the business in big games and Rudi is Hearts' talisman," said Robertson.

"If there's one player who can produce something different - a thunderbolt shot or a free-kick, he's the man."

Skacel, 32, said last week that he had not been offered a new contract.

And Hearts coach Gary Locke conceded that it was unlikely the club could afford to keep the player as they look to cut costs.

"Unless he agrees to a [wage] reduction, he'll probably move on."

Skacel ended his first spell with Hearts by scoring in the 2006 Scottish Cup final against Gretna, with the Edinburgh side going on to win after a penalty shoot-out.

He returned to Tynecastle in September 2010 and has been the club's top scorer this season, finding the net on 16 occasions, including one in the 2-1 semi-final victory over Celtic.

"He's come back and lifted the club," added Robertson, who scored an astonishing 27 goals against Hibs during his Hearts career.

"If there's one player that gets me out of my seat, it's him. But I don't care who scores the winner, as long as he is in maroon and white!"

Hearts manager Paulo Sergio is also facing an uncertain future as he nears the end of his contract.

However, Robertson thinks a win over Hibs should earn the Portuguese a new deal.

"If he wins it, then I'd hope he'd be here for at least another year," he said. "The league form hasn't been great and we were knocked out the League Cup early, so we need to win this one to make it a right good season.

"If it was any other team bar Hibs, then it might be different. But it's become such a massive game that if he does win, I think he'll stay."

Robertson ended his 17-year playing career at Hearts as an unused substitute when the club won the Scottish Cup in 1998.

And he firmly believes the maroon half of Edinburgh will be celebrating an eighth success in the tournament on Saturday.

But, despite a recent stranglehold in the fixture, including a 4-0 Scottish Cup semi-final win when the teams last met at Hampden in 2006, the former Scotland striker warned against any complacency.

He said: "Am I confident Hearts are going to win the cup? Absolutely.

"If we turn up and play as we can play, there is only one winner.

"All that does is fire up the opposition.

"There should be a confidence rather than an arrogance.