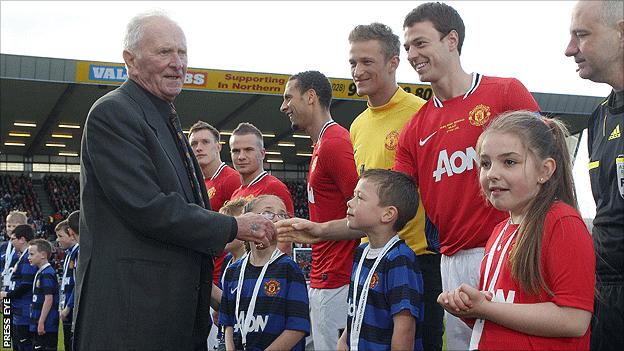 Michael Owen put Evra clear for the opener but Chris Scannell headed an equaliser early in the second half.

Young restored United's lead on 57 minutes with a direct free-kick.

Substitute Rooney scored from a penalty after Ross Redman's foul on Tom Cleverley before Young got his second goal near the end.

The game was a testimonial for ex-goalkeeper Gregg, who survived the 1958 Munich air disaster and was praised for staying with the burning plane to help passengers to safety.

The former Northern Ireland international had a 10-year spell with United, making 247 appearances.

"We should alway pay homage to those players who have played such a part in creating our history and Harry is one of them," he said.

"Harry showed great courage in the Munich air disaster. There was also his longevity as a goalkeeper at Manchester United.

"He is part of the rich history of our club and we should never forget that."