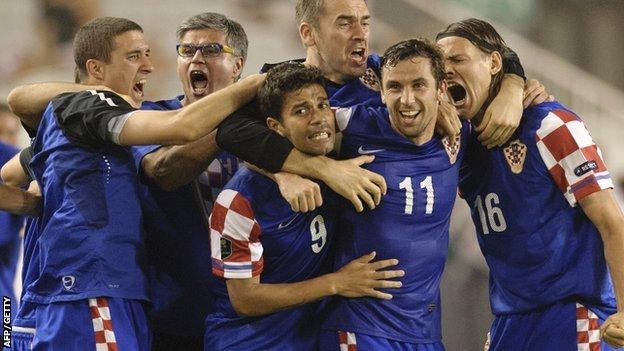 Croatia may have the smallest population of any nation competing at Euro 2012, but their expectations could hardly be higher.

Coach Slaven Bilic is adamant his side can challenge for the title and striker Eduardo believes they should reach at least the last four.

With the likes of Eduardo, Luka Modric, Nikica Jelavic and Niko Kranjcar wearing the iconic red-and-white chequered shirts, such optimism is understandable.

That attacking arsenal alone would be the envy of many rivals, not to mention Ivica Olic, Mario Mandzukic, Darijo Srna, Ivan Rakitic and Ivan Perisic.

Currently eighth in the Fifa rankings, Croatia made the European Championship quarter-finals in 1996 and 2008 while memorably finishing third at the 1998 World Cup.

Not bad for a country with less than 4.3 million people, which only declared independence from Yugoslavia in 1991.

"For many years, Croatia have been ranked in the top 10 and that's a big surprise for such a small country," former Arsenal striker Eduardo told BBC Sport.

"Every year we seem to be able to produce talented players. Everyone likes the way Croatia play - it's beautiful football."

Croatia's ability to unearth so many gems is, according to defender Vedran Corluka, a result of their obsession with the game.

"Croatia is a football country," he explained. "When you are born, the first thing your father gives you is a football. It's in our blood.

"On every street, you see people playing football. They live for football. As a kid you want to score goals, so every kid is a striker. We've had so many good attacking players."

It is a trend exemplified this season by Premier League pair Modric and Jelavic, both 26.

Modric has firmly established himself as one of Europe's leading creative midfielders since signing for Tottenham from Dinamo Zagreb in 2008.

Jelavic started his career at Hadjuk Split and joined Everton from Rangers in January. He has found the net 11 times in 13 starts since then and, remarkably, 42 of his last 47 goals have been scored with one touch of the ball.

"We have no good infrastructure for football, no good stadiums, no money - we have only pure talent," said Anton Samovojska, football columnist for Croatian daily sports newspaper Sportske Novosti.

Crosses per game in Euro 2012 qualifying

"Our young players are educated and coached in a very special way. We call it the 'Croatian football school'. The philosophy is to develop all skills and technique. They are not limited by tactics or physical preparation too early.

"Barcelona have La Masia and our philosophy is similar - pass, move, vision, technique, space. Our clubs are trying to do it the same way and that helps the national team."

The success of that philosophy will be put to the test when Croatia face a Spain side likely to contain several Barcelona stars in their final Group C match on 18 June.

Pitting his wits against Xavi and Andres Iniesta in central midfield should be the ultimate examination for Modric, on whose shoulders huge responsibility rests.

Competition for places is so intense that Jelavic is not expected to start up front, although judging by his Everton form he could still have a big say in proceedings.

Yet the Spain match could be meaningless if Croatia fail to take points off the Republic of Ireland on 10 June and Italy four days later.

With that in mind - and given their dramatic last-eight defeat by Turkey at Euro 2008, their failure to qualify for the 2010 World Cup and the fact Euro 2012 is Bilic's last tournament after six years in charge - motivation is high.

"The World Cup was a big blow but we had a change of generations in that period," said Corluka. "Lots of players left the national team after Euro 2008 so it was really tough.

"But now we have all played together for two or three years and we are extra-hungry to show people that 2010 was an exception.

"Our main strength is spirit. When we are called for the national team we are the happiest people in the world. All 25 players are really good friends and when we are not together we are speaking on the phone. We would do anything for each other."

However, with hope comes expectation and if Bilic's men fail to fulfil their potential in Poland and Ukraine, they will hear about it in no uncertain terms.

"It would be a failure if we didn't get out of the group," admitted Eduardo, who now plays for Shakhtar Donetsk.

"But even if we had a group with Spain, Brazil and the Netherlands it would be a failure because in Croatia there is big pressure from the newspapers and fans.

"We came second in the our qualifying group and they killed us. They are never happy. But we believe in ourselves and know we can go to the semi-finals or final."

Corluka added: "Croatia has a really bad history. Even now the country is not in that good shape, and neither is Croatian club football.

"Everyone is looking to the national team at the Euros and we have a big obligation to do well. Bilic doesn't have to motivate us. We don't need it.

"When we come out and see our fans, that's enough. We don't need speeches, only that shirt. And when we hear our anthem, we will give everything for our country."

It is a small nation, with big expectations and a cast-list of world-class talent to help it secure a triumph that would rank among the greatest in football history.