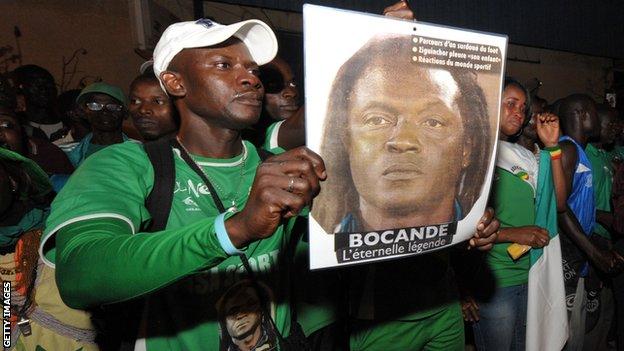 Thousands of Senegal fans gathered in Dakar on Tuesday night to pay tribute to their late captain Jules Bocande.

The 53-year-old former skipper died last week, prompting an outpouring of emotion in the country.

More than 30 thousand people gathered in the Demba Diop stadium to pay their respects, in a ceremony led by the country's President, Macky Sall.

"He was a father, a brother, an advisor - my heart aches," Diouf told the crowd.

Bocande's coffin was draped with the national flag as people - including the President - paid tribute to him.

He will be buried on Wednesday in his home town.

Bocande had been unwell for several months after suffering a stroke.

He was part of the Senegal side for many years and took part in three Africa Cups of Nations with the Teranga Lions before being part of the coaching staff which took them to the quarter-finals of the World Cup in 2002.

He spent most of his club career in France, playing for Metz - where he had most success - along with Paris Saint-Germain, Nice and Lens.