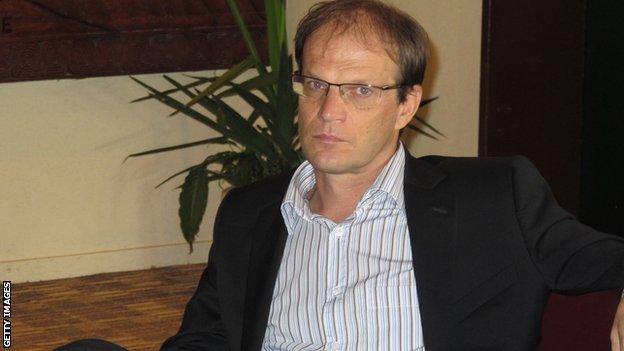 Cameroon coach Denis Lavagne has called for 'clarity' between the squad and the staff ahead of their triple qualifying challenge in June.

The Indomitable Lions have been beset by problems in recent months, following their failure to qualify for the 2012 Africa Cup of Nations.

A player strike over payments led to a ban for captain Samuel Eto'o and former star Roger Milla has persistently criticised the running of the game in the country.

"We'll have a meeting, to clear up some things about the way the team operates," Lavagne said.

"This is about the player's complaints during the tournament in Marrakech (when they went on strike).

"It's to clarify some things and to talk to the players to make sure that things are very clear before we play the three games in June - and also for the future.

"We need to clear up all these misunderstandings between the players and the staff."

Cameroon face DR Congo and Libya in 2014 World Cup preliminary matches in June, before hosting Guinea Bissau for the second leg of their 2013 Nations Cup qualifier - which they lead 1-0 from the first leg.

Lavagne says he is "enthusiastic" about the team's tough programme in June.

"We have four weeks to prepare for three encounters - it's not unusual," the coach said.

"I think it will be good to have the players together for a month - it's allow us to work on certain things, communication and cohesion."

Lavagne has vice-captain Enow Eyong available again, after the end of his ban - which was imposed for his role in the Morocco strike.

He has called up Esperance star Yannick Ndjeng to the squad, along with Williams Overtoom - who plays for Heracles in the Netherlands.