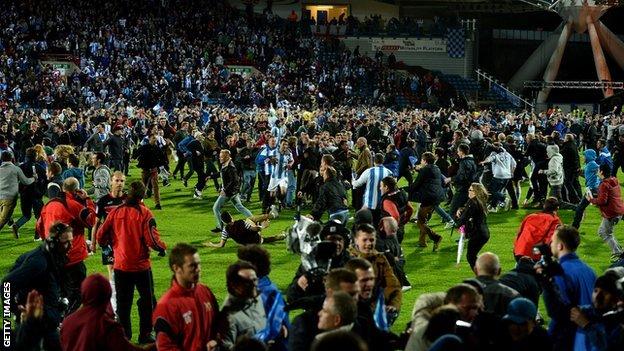 Huddersfield Town are to review the pitch invasion that followed the second leg of their League One play-off semi-final against MK Dons at the Galpharm.

Dons player Alan Smith was reportedly involved in a fracas with supporters after the game, which Huddersfield lost 2-1, but won 3-2 on aggregate.

In a statement, chairman Dean Hoyle said: "Last night was a great occasion.

"It is upsetting that the tremendous achievement of reaching the final has been tarnished."

He continued: "It goes without saying that we will look closely at what occurred.

"I am not going to prejudice the outcome, but personally, as chairman of the club, I unequivocally condemn the actions of any so-called supporters who engage in anti-social or violent behaviour."

"But there are two or three absolute mindless people. Yes there's history, but people move on in their careers."

A statement from the Dons said: "MK Dons would like to place on record its thanks to Huddersfield Town Football Club for their swift response in reviewing events from last night.

"The club are proud to have been part of a fantastic spectacle for League One and would like to thank both sets of supporters; unfortunately a small minority took it upon themselves to tarnish a great occasion.

"The safety of supporters, officials and players is vital at any level of football and MK Dons will work with Huddersfield Town to ensure these incidents are prevented in the future."

Meanwhile, the Football Association has confirmed it has written to both clubs to seek their observations on the pitch invasion.