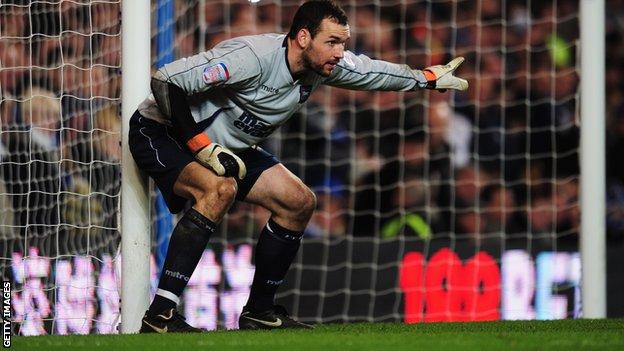 Fulop, Keith Andrews and Paul Scharner will all become free agents on 30 June.

The keeper's departure is little surprise following the two howlers he made on his Albion Premier League debut at The Hawthorns on Sunday, as the Baggies lost 3-2 at home to Arsenal, who secured qualification for the Champions League.

Scharner was resigned to moving on when his contract expires, having failed to trigger a 12-month extension option after making less than the required 25 appearances this season.

But Albion, who lost manager Hodgson to his new job as England boss following the Baggies' final game of the season on Sunday, have not ruled out making new contract offers to Scharner and January deadline signing Andrews.

And whoever comes in as new manager may yet opt to keep both players.

While we're in a position where we do not have a permanent head coach, we are holding open the possibility of negotiations to enable both players to come back to The Hawthorns

"Neither Paul nor Keith had an option to trigger," said Albion sporting and technical director Dan Ashworth.

"While we're in a position where we do not have a permanent head coach, we are holding open the possibility of negotiations to enable both players to come back to The Hawthorns."

Shorey and Mattock have been let go as a result of Liam Ridgewell's success since moving from Birmingham in January.

"Liam has come in and very much made the left-back position his own," added Ashworth. "We felt Nicky and Joe's opportunities would therefore be limited.

"Joe was very instrumental in our promotion from the Championship - but his opportunities have been limited in the Premier League.

"He is still at the beginning of his career and Nicky is an experienced player. Both require regular first-team football that we can't guarantee them.

"Somen Tchoyi had some real highlights in his first season with us, including his hat-trick against Newcastle on the final day. And he made a key contribution to us finishing 11th last season.

"But, due to the signing of Shane Long and the return to form of Marc-Antoine Fortune, his opportunities to play have become fewer and fewer so we decided it was best to part company.

"Lateef has been with us since he was 15. He's a really hard worker who has had some successful loan spells in League One. We just felt staying in the Premier League for a third successive season means the bar has been raised, and it would be hard for him to break into our first team."

Young striker Kayelden Brown will remain with the club on a month-to-month contract as he continues his rehabilitation from a knee injury.