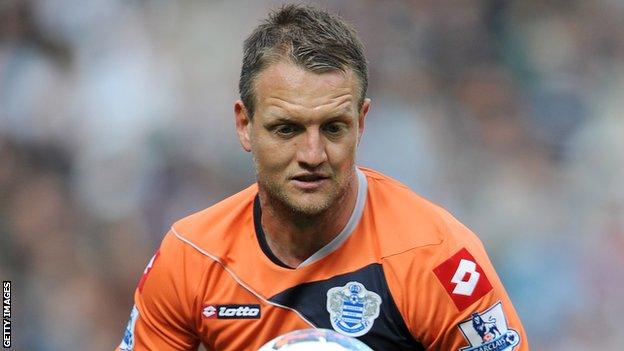 QPR defender Clint Hill hopes he will be able to extend his stay with the Premier League side.

The 33-year-old, who made 25 appearances for Rangers during the season, is out of contract this summer.

He told BBC London 94.9: "The last couple of years have been the highlight of my career. If I can stick around and help in any way, I'd love to.

"I'd like to help the club build and push on. I'm hoping we can sit down and see if I will be part of the future."

He added: "If I can stay I'd be very grateful."

With Premier League survival ensured last weekend and a new training complex at Warren Farm in Ealing on the horizon for the start of the 2013-14 season, Hill believes the future is bright at Loftus Road.

The fans deserve credit. We went through a dodgy spell and they stuck by us

"There are things that are happening at the club now," he continued.

"A new training ground was essential for this club to progress, attract players and bring people through the academy.

"These are exciting times for QPR and I can definitely see the club pushing on. We needed to stay in the Premier League and hopefully we can slowly build from here."

"The main thing for us was to stay in the Premier League, and the awards are just the icing on the cake," he continued.

"The players award is the one to win if you can. They're the ones you train every day with and it's a massive honour for me.

"The fans deserve a lot of credit. We went through a dodgy spell of games when we weren't winning and they stuck by us.

"They deserve massive credit for what we've achieved this year."