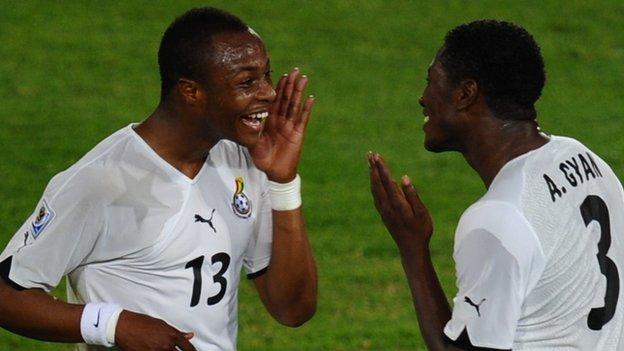 Striker Asamoah Gyan is not in Ghana coach Kwesi Appiah's first squad, despite talks aimed at getting him to return for the national team.

Also missing from the provisional party are Michael Essien and the injured Andre 'Dede' Ayew.

John Paintsil and former captain John Mensah have both been dropped.

In all there are ten locally-based players in the party of 30 - including four from African Champions League contenders Berekum Chelsea.

Berekum's Emmanuel Clottey is the top scorer in the club competition so far this year, with his six goals helping his side reach the last eight.

Coach Appiah has named seven new players for this provisional line-up - including Swiss-based midfielder Ishmael Yartey and Christian Atsu, who plays in Portugal.

Ghana tackle Lesotho in Kumasi on 1 June, for what will be Appiah's first match in charge.

Gyan took a break from international football after being targeted by fans following the country's Africa Cup of Nations disappointment.

He promised to come back at some stage, but Ghana had been hopeful of persuading him to return in time for the June qualifiers.

Ayew had an operation recently and Essien has been concentrating on his club career at Chelsea.

There is no place in the 30-man squad for Kevin-Prince Boateng. The AC Milan midfielder is reported to have angered Appiah, who - it's claimed - has tried and failed to make contact with Boateng on several occasions.

Under-20 World Cup star Dominic Adiyiah, who missed out on selection for the 2012 Africa Cup of Nations, returns to the party.

Albert Adomah has been forced to withdraw from the squad ahead of next month's World Cup qualifiers.

The Bristol City striker is out after suffering a knee injury. He has been replaced by debutant, Solomon Asante of Berekum Chelsea.

Asante will join the Black Stars when they come together in Accra on Monday.

The squad will be pruned before the team departs for Kumasi on 27 May.