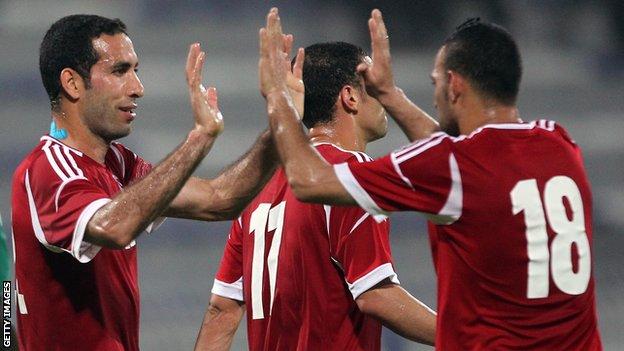 Fans are to be excluded from 2014 World Cup qualifiers featuring Egypt and Libya next month.

The Associated Press (AP) reports that Egypt versus Mozambique and Libya against Cameroon will both take place behind closed doors.

The Libya-Cameroon game will be played in Sfax in Tunisia.

Football's world governing body Fifa confirmed the move to AP and said the decisions had been taken by the authorities in the countries involved.

Both Egypt and Tunisia have bans on fans attending matches in place because of the security situation following the political upheavals of the last year.

Fifa also said that security arrangements in Mali were being reviewed, after two clubs were trapped in the capital Bamako by a further outbreak of violence.

Mali are due to host Algeria in a 2014 qualifier next month.

Fifa confirmed they had already looked at security plans for Nigeria's game against Namibia - which has been moved from Kaduna because of a series of attacks in the northern city.

The match will instead be played in Calabar in the south-east of the country, and Fifa said safety measures for the game were "comprehensive and very thorough".

There will be two rounds of World Cup qualifiers in June at the start of Africa's long road to Brazil 2014 - with games taking place on the first two weekends of the month.