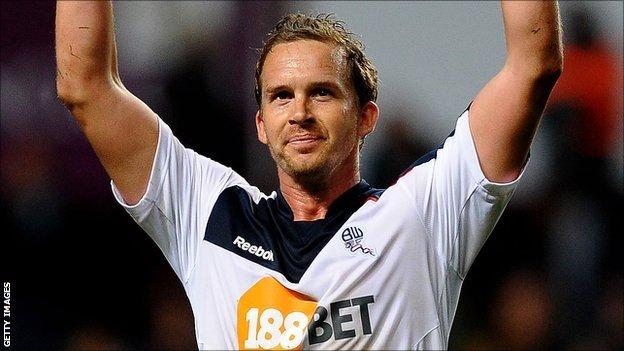 Fifteen players have left Bolton Wanderers following their relegation from the Premier League, while Kevin Davies has signed a new one-year deal.

The striker and defender Sam Ricketts, who has agreed a two-year deal, are the only players to commit to the club.

Negotiations with Jussi Jaaskelainen and Zat Knight are ongoing.

Ricardo Gardner, Gretar Steinsson and Ivan Klasnic are among those released, while Nigel Reo-Coker has activated a release clause in his contract.

Meanwhile, Tuncay, Ryo Miyachi and Dedryck Boyata have all returned to their parent clubs after reaching the end of their loan spells at the Reebok Stadium.

Manager Owen Coyle told the club website: "I was clear with Nigel [Reo-Coker]. I asked him straight away whether he wanted to be a part of what we are going to do next season.

"He was honest and up front with us, because that is the type of man that he is, and said that he wanted to exercise the clause in his contract, so we wish him well.

"I would also like to thank the players that are leaving the club for their work at Bolton Wanderers. We wish them all well."

Chairman Phil Gartside told BBC Radio Manchester on Monday that he expected several players to leave and added that the wage budget could be halved as the club prepare for life in the second tier for the first time since 2001.