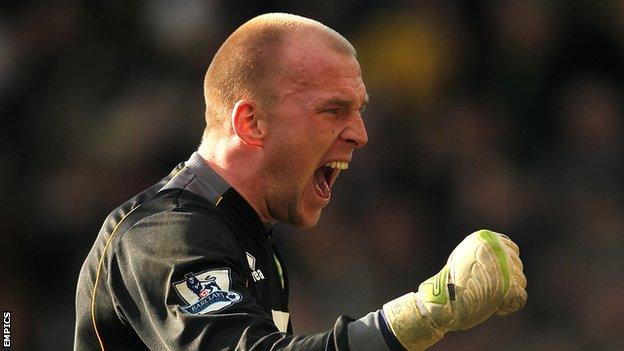 They call John Ruddy the "Iceman" - and he will need to be just that if fate means he is called into action for England during the Euro 2012.

He will travel to Poland and Ukraine uncapped, with just nine months' Premier League experience and a history of lower league football behind him.

From Cambridge United to Everton and then, when opportunity failed to knock at Goodison Park, nine spells on loan with various clubs, he eventually settled in Norfolk.

And now, after a champagne season with Norwich City, he will be on the plane to Euro 2012 with the rest of Roy Hodgson's 23-man party following a surprise call from England's new boss.

But Ricky Duncan, the coach who oversaw his progress at Cambridge, believes the 25-year-old will make the step up with a total lack of nerves.

"He had a nickname in the youth team and it's followed him through - they called him the 'Iceman'," Duncan, now at Southend United, told BBC Sport.

"Alright, he's had a shaky one here and there but he comes back strong."

After being spotted by a U's scout, he soon made an impression at the Abbey Stadium and was given his first-team debut as a 17-year-old in an end-of-season League Two clash against Leyton Orient.

"When a 17-year-old is playing League Two football like he was, you knew he was going to go onto something else."

A year later, Everton came calling and paid £250,000 for Ruddy, but he only made one substitute appearance on Merseyside and spent the next five years criss-crossing Britain, from Bristol City to Motherwell and many points in between.

In 2010, however, Norwich boss Paul Lambert took a punt on Ruddy after guiding his team to the League One title.

His debut season in the Championship was good as the Canaries achieved back-to-back promotions - and in the Premier League, Ruddy has been superb, pulling off 216 saves as the club achieved mid-table security.

Things have gone well off the field as well - and he will be given leave from England duty to walk down the aisle with fiancee Laura on 2 June, the same day the national team meet Belgium in a Wembley friendly.

"I'm absolutely delighted and so grateful to the Football Association for agreeing to let me go ahead and get married," he said.

"It would have been a nightmare after one-and-a-half years of planning to have to postpone the wedding, so it's a major relief that we can still go ahead."

Although Hodgson might not be an obvious candidate for the role of Cupid, he felt circumstances allowed a bit of leeway.

"He offered to postpone the wedding but personally I think it's dangerous to postpone a wedding.

"I suggested we deal with the Belgium game with Joe Hart and Rob Green and we'll welcome him back on the plane when we go to Poland," he said.

"John's had an excellent season with Norwich. He's been a very important player in that team.

Nine years ago Ruddy was kicking a ball about on the green, interlocking commons of Cambridge. So how would he react to being called upon during England's pursuit of European glory? His old coach has no doubts.

"He would thrive on it," insists Duncan. "He'll be waiting for that opportunity and it will be just like he's played 100 games.

"It's a great thing for any kid at any club in the lower leagues. John's a flagship for that now."