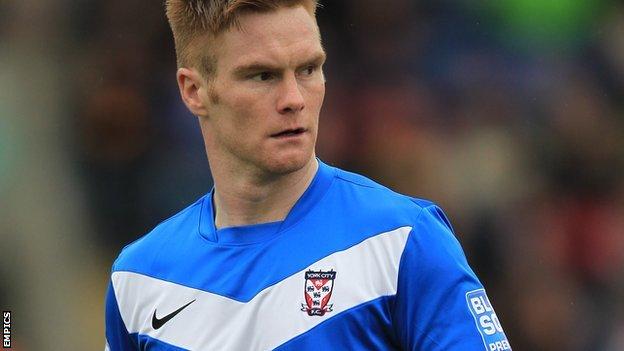 York City striker Jason Walker says he will not let any abuse he may receive in Sunday's play-off final against former club Luton affect his game.

Walker, 28, endured a difficult spell with the Hatters, which culminated with him missing a penalty in last season's play-off final against AFC Wimbledon.

"I expect a bit of stick and it doesn't bother me," he told BBC Radio York.

"If all goes well, hopefully we can bag the win and I can get a goal to rub it in a little bit more."

He continued: "They did a lot for me at Luton but it just didn't go well for me and I was homesick for a number of reasons.

"As soon as I spoke to the manager at York he made me feel how I wanted to feel at Luton, so if we can beat them in the final, then I'll have made the right choice."

Walker, who has scored 18 league goals since joining York from the Kenilworth Road side last summer, helped the Minstermen beat Newport 2-0 in the FA Trophy final last Saturday.

But despite the obvious distraction of their first trip to Wembley, the former Barrow player says it has not been difficult for the squad keep the prospect of gaining promotion back to the Football League after an eight-year absence at the forefront of their minds.

"The celebrations were a little subdued on Saturday and rightly so. Our main aim this season was to get promoted to the Football League and that's what we're focusing on," he added.