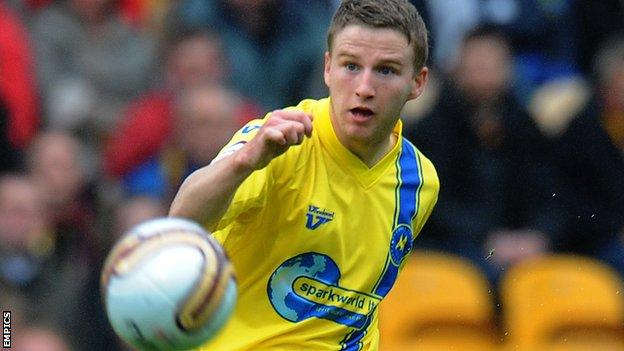 Torquay's Eunan O'Kane says he wants to play in major tournaments after being named in the Republic of Ireland's Under-21 squad for the first time.

The ex-Coleraine midfielder announced he was

"I've made my decision to change and they were more than willing to have me," 21-year-old O'Kane told BBC Sport.

"Those major tournaments are a big plus and hopefully I'll be able to get to one of those with them."

The Republic face Denmark in a friendly on 28 May before taking on Italy in a European Championship qualifier on 4 June in Sligo.

Former Everton youngster O'Kane joined Torquay from Coleraine in January 2010 and has been an integral part of the side which has reached the play-offs as well as being named in the League Two team of the season.

He says his main aim now is to impress boss Noel King and cement his place in the side.

"Hopefully I can go there at the beginning of June and impress and be in future squads.

"I've had contact with the manager and he's been here a few times to watch me, he's taken an interest in me, and he's liked what he's seen."

O'Kane told the BBC last September that his decision to and says his reasons will remain private.

"I haven't really spoken to anyone about it, I spoke to my friends and my family about it and they all basically backed me and said whet ever decision I made they'd stand by me.

"I've had a few comments from Northern Ireland fans that were unhappy about it, but they don't know what's happened.

"No-one does really and that's the way it'll stay, but I've made the decision that's best for me and hopefully I can go on and prove that at the end of June."