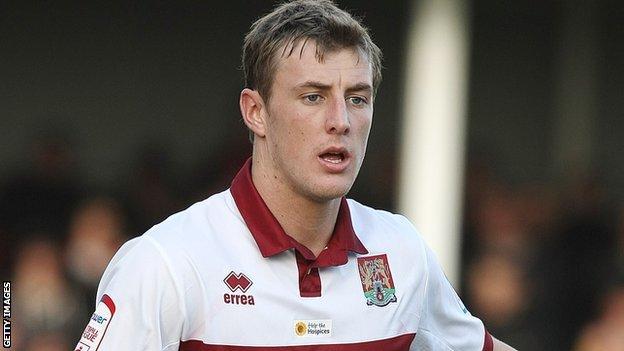 Northampton Town defender John Johnson has signed a one-year contract extension at the club, with an option for a further year.

The 23-year-old, who joined the club on loan from Middlesbrough in 2009 before signing a permanent deal in July 2010, has made 125 Cobblers appearances.

Manager Aidy Boothroyd said: "He has a good amount of experience for someone of his age.

"I am sure he will just get better and better as that experience increases."

Boothroyd added: "He is a competitor and it was important for me that we were able to keep him at the club."

Johnson was the club captain under Boothroyd until the arrival of Clarke Carlisle.

Johnson is consistent, a firm fans' favourite and a brave, no nonsense defender.

The Cobblers will be delighted to re-sign him. He's one of perhaps six players who might have attracted interest.

And his form in 2011/12 improved after he was relieved of the captaincy.

"We saw what John was capable of at times last season, but he wasn't quite consistent enough and achieving that consistency is the challenge for John moving forward," said Boothroyd.

"I know he will work very hard and rise to that challenge and I am looking forward to helping him realise his potential and become an even better player.

"Like all of the players, he has been given a fitness programme to follow over the summer and that will ensure he will be back for pre-season in tip-top condition.

"In patches John has shown a lot of ability, which is why we made him this offer, and I think he can do even better next season."

The League Two side are now waiting on decisions from goalkeeper Neal Kitson, defenders Anthony Charles and Clarke Carlisle and midfielder Michael Jacobs, who have also received contract offers for next season.